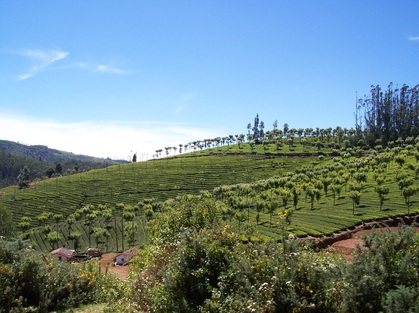 Tea growing on the sides of the hills.
Once again, I had completely lost track of the date, though I did know that it was a Wednesday. This morning, all of my traveling companions except me, Betty and Rick got up at 5:50 a.m. to go on a hike to find wildlife. I slept in until 6:40.

At 8:30, everyone returned from their hike. One group of hikers saw some leopards, though at a great distance, but the other group didn’t see anything exciting. After we all had breakfast together, we loaded our luggage back onto our minibus and drove through the Nilgiri Hills passing by one tea plantation after another.

(Click on the images below for a clearer photo and to enlarge.) 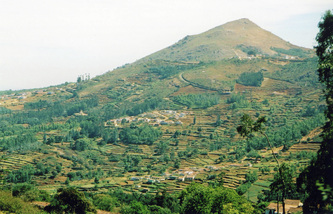 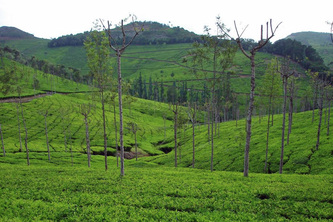 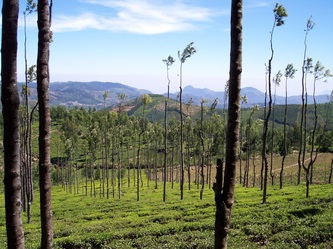 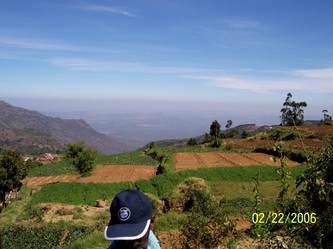 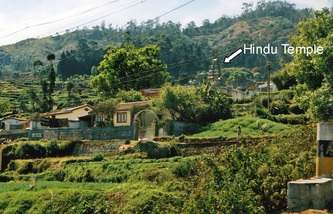 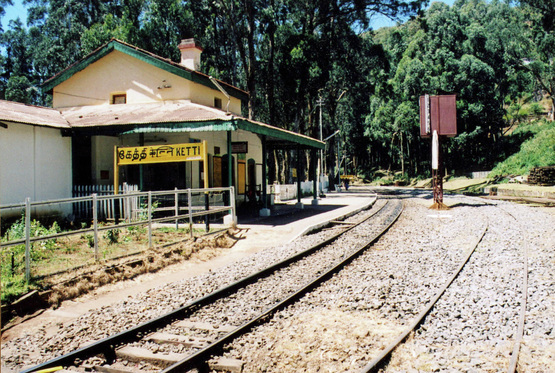 The train station at Ketti.
We stopped in the picturesque village of Ketti, located at 7,000 feet in the Nilgiri Hills. Our driver let us off at the Ketti train station, where we waited to catch the “toy train” to Udhagamandalam, or Ooty as it is more commonly called. The toy train is thus called because it is a narrow-gauge train. Even though we were only taking the train 5 miles, it covers a total distance of 46 miles. The uphill journey takes almost 5 hours from Mettupalayam to Otty, the last stop on the line, while the return trip takes only 3½ hours. It is the steepest track in all of Asia.

As the train pulled into the station, we could see that it was already loaded with people. We wondered how we were going to get on and find a seat, but our guide, Priya, knew exactly where to stand on the platform. We ended up in a rail car that was practically empty, probably because it was a first class car, and the majority of Indians ride second or third class. 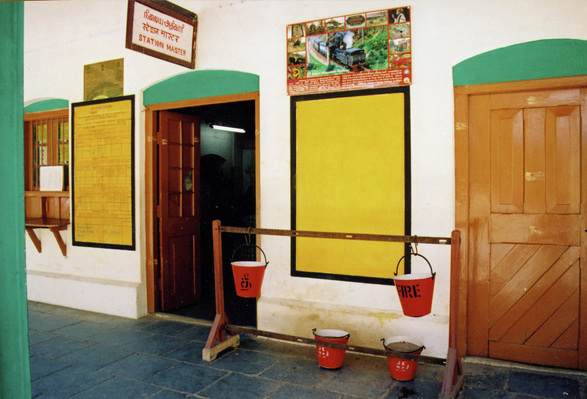 Not too reassuring in case there's a fire! 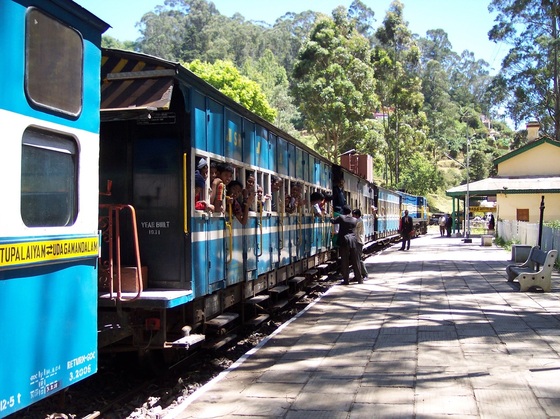 The train pulls into the Ketti train station. 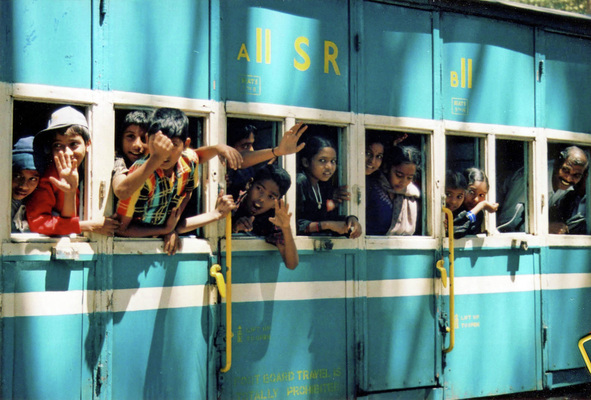 The train pulls into the Ketti train stataion already loaded with a group of school children. 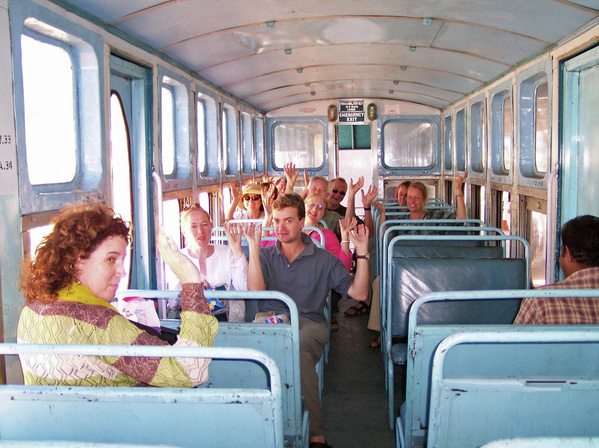 Me and my fellow travelers on the train from Ketti to Ooty.
On the toy train, we rode through a stunningly beautiful valley.  Our 5 mile ride took a little over 30 minutes, and we departed the train in Ooty. Ooty was established by the British in the early 19th century to serve as the summer headquarters of the Madras (now Chennai) government. Until about twenty years ago, Ooty resembled an unlikely combination of southern England and Australia; single-story stone cottages, bijou-fenced flower gardens, leafy winding lanes and tall eucalyptus stands. Today, tourist development has totally transformed Ooty, but it retains a certain appeal. Life here is relaxed, and touting and harassing is less prevalent. 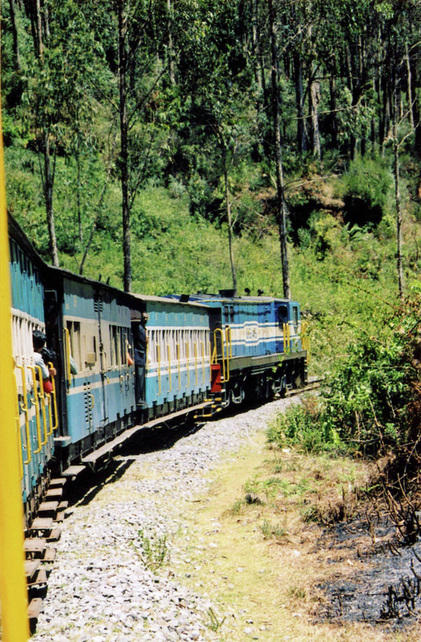 Riding the train from Ketti to Ooty. 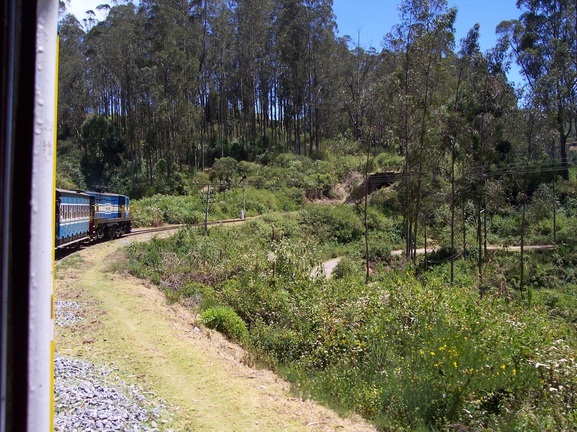 Riding the train from Ketti to Ooty.
After arriving in Otty, we all went for a walk, which turned out to be a grueling march up a never-ending hill. Of course, I lagged behind because it was a very difficult climb – for me at least. Priya walked with me and we had a really nice chat. Finally, at the top of the hill, lunch was waiting for us: chapattis on a banana leaf wrapped in newspaper, some sort of curry to put on the chapattis, bananas, apples (which I did not eat because I had no way to peel it) and the most delicious dessert called “laddu”: little orange balls made from chick peas, carrots, sugar and ghee butter. Then I did a little exploring of the surrounding area, and, feeling nature call, found a secluded spot among some tall bushes to go. I was wearing my “pee pants” from Africa, and, once again, I peed all over them this time trying go to the bathroom in the bushes. (I don’t usually have this problem as I am an expert at going to the bathroom behind a bush!)

The walk down the other side of the hill was very nice. The weather in Ooty is quite pleasant – probably in the 70s. All of the locals are bundled up in coats and hats! Once we reached the bottom of the hill our minibus was waiting for us. We all hopped in and drove a very slow hour uphill to Coonoor to visit a tea factory.

At the Doddabetta Tea Factory we had a very informative guide explain to us the history and origins of tea, tea history in India and, finally, the evolution of tea in the Nilgiri Hills. We learned that all tea comes from only one flowering evergreen shrub, Camellia sinensis, regardless of where it is grown and that the variations in teas are caused by differing conditions in the tea-growing countries: geographic characteristics, when and how it is plucked and what is done to the leaf after it is plucked. We then had a guided tour of the actual factory to see first-hand how the tea leaves are processed into tea that can be drank, which is explained below (from the Doddabetta Tea Factory website, www.teamuseumooty.com.)

The first stage in manufacturing is called withering. The tea leaf which arrives from the estates is spread on withering troughs and a mixture of hot and cold air is passed through them so that some amount of moisture is removed from the leaves. The withering process takes about 10 to 12 hours.

The rotorvane, through which leaves are passed after being demoisturized, crushes the leaves, extracting the juices. The leaves, soaked in the juices, now enter CTC machines.

After the rolling the leaves enters into the googy. This is a large aluminium drum which runs at normal speed. Thetea particles, while passing through this process, develop the much needed round shapes and density.

The leaves which comes out of the googy is now spread out in Fermenting trays. The leaf is spread in the form of beds, usually of 4 ft width and 10 ft length, with a thickness of not more than 3 inches. During fermentation, the leaf reacts with oxygen in the air and changes color. The ‘dhool’ which are spread on the floor slowly turn copper red. At a particular point when smelt, a fruity fragrance is identified which indicates the ‘dhool’ are ready for drying.

The fermented dhool enters into the Fluid bed drier. The tea passes over a perforated, stainless sheet of dimensions 21/4ft x 16ft. Hot air produced by a heater enters through the bottom of the sheet keeping the tea in constant motion, making it appear like a liquid. The name fluid bed drier is therefore apt. the drying process takes 16 minutes.

The dried tea now passed through an elevator and falls into a machine called the Fibromat. As the name indicates, it helps remove the fibre in the tea. At the end of the Fibromat is a mesh that separates the dust from the leaf. The next activity involves two shifters, one for the dust and the other for the leaf. The leaf tea is granular in shape and graded into Pekoe, BOP, BP and BOPF according to their sizes. Similarly, the dust tea is graded into Pekoe dust, Red dust, Super red dust and Super fine dust according to their sizes.

The tea leaves are given flavors like cardamom and ginger as required and packaged in the tea factory. The making of tea as we know it in our daily life is an out of the world experience not easy to forget.
After touring the factory, we were each served a cup of masala tea. It was delicious (like all tea in India)! Before we left the factory, I bought some cardamom tea, which is used to make masala tea, and some orange pekoe for my husband, Dennis. The tea I bought was grown and processed at the Doddabetta Tea Factory. 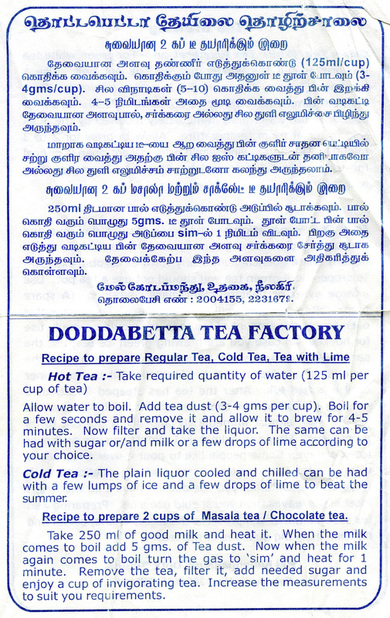 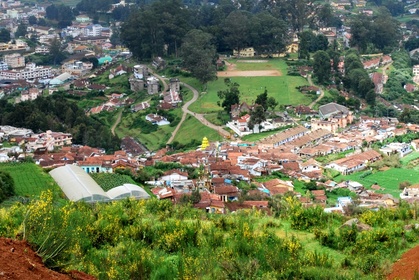 Ooty
We reboarded our minibus, which took us into downtown Ooty. The name Udhagamandalam is derived from the Toda word othakal-mund, which means “house in the mountains.” (The Toda are a tribal group of fair-skinned and curly haired people who are strict vegetarians that live in the Nilgiris.) Ooty stands at 7-347 feet in the Nilgiri mountain range. It was founded in the 19th century by the British and served as the summer headquarters of the Madras Presidency.

Once in downtown Ooty, our minibus dropped us off. Debbie and I went to an Internet café, and I sent off emails to my two daughters, Kathleen and Christy, who had each sent me an email. It was so nice to hear from them. Debbie’s was unable to connect to her email server, so she was unable to send any emails. We then took an autorickshaw back to the Ratan Tata Officer’s Holiday Home, the guesthouse we are staying at.

Ratan Tata Officer's Holiday Home
The Ratan Tata was an old, colonial Indian military house built in 1870. It is quite large and really cool. My room had wooden floors and antique furnishings. It contained a fireplace, but it had been boarded up. The bed was the hardest I have slept on in India… or anyplace else for that matter! My bathroom was huge and has an old-fashioned pull-chain toilet. There was a door in my bathroom that led to a balcony which ran along the whole side of the house. There were beautiful gardens outside Ratan Tata with many lovely flowers.

(Click on the images below for a clearer photo and to enlarge.) 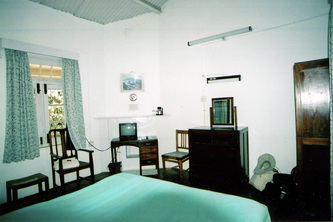 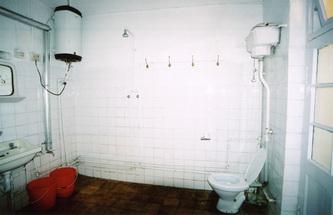 It was supposed to be really cold in the mountains the night I stayed at the Ratan Tata – below freezing – and my bed had about 6 inches of covers. The evening was quite chilly as we all took auto rickshaws to The Savoy Hotel, built in 1879, for a really nice dinner in their restaurant.  It was a really cool restaurant – British colonial. An old Indian man played the piano while my traveling companions and I had an enormous buffet dinner. After dinner, we gave Priya a card we had all made and some cash (500 rupees from each of us), and she was very touched. The following day, we were to start back to Cochin, where Priya, our wonderful guide for the past 15 days, as well as excellent traveling companions Bill, Ann and Kevin, were to leave the rest of us in a couple days, while we were to travel onto Delhi in the northern part of India. So, this was our “official” farewell dinner.

(Click on the images below to enlarge. All of the photos at our farewell dinner were taken by traveling companion Debbie Herbert.) 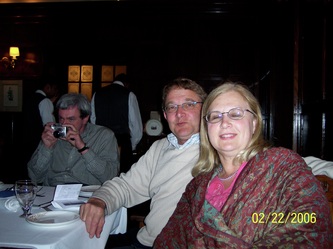 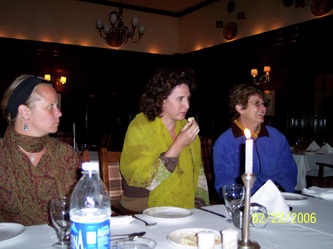 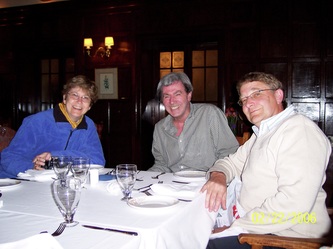 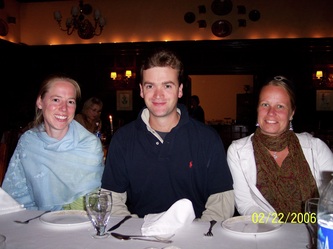 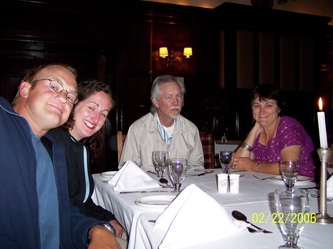 The ride back to the Ratan Tata was freezing; those auto rickshaws are completely open. After packing my backpack, I checked to make sure that the bathroom's water heater was turned one, I climbed under the thick covers and went to sleep thinking to myself, “I just better have hot water tomorrow morning.”
NEXT: COCHIN, INDIA (SECOND TIME AROUND)