We arrived at the Indira Gandhi International Airport in Delhi on the 8th at 9:15 p.m. At last, INDIA! Betty, Rick, Debbie and I were so excited. It was chaos getting through customs, but we finally made it! Once we were out of customs, the airport was fairly calm, until…

It was about 10:30 p.m. when we made it outside for our first real glimpse of India. As we neared the doors to leave the airport, it looked like a huge mob had assembled right outside. A rope barrier kept the crowd from bearing down on the newly-arrived passengers as they exited the airport doors, but it was still a mad crush of people. Once we departed the building, India hit us full force. The noise was the first thing: the voices of the hundreds (perhaps thousands) of people in the multitude; the symphony of vehicle horns; the sound of Indian music blaring from who-knows-where. Then the smell; it wasn’t an offensive smell by any stretch of the imagination, but it was new and different than anything else I had ever breathed: a mixture of humanity, food, incense, pollution and who-knows-what-else (probably human waste). It was nighttime in Delhi, so we couldn’t see the pollution in the air, but we could smell it and feel it. From everything I had heard, I expected that my eyes would start burning immediately, but that wasn’t the case. It was just that it made a bad taste in my mouth, and I just knew my lungs were breathing in toxic carcinogenic air. After all, Delhi is reportedly the most polluted city in the world, yes WORLD!

Anyway, we were in India! That’s all that mattered at this point.

As we left the airport, Betty, Rick, Debbie and I started looking for my sister, Susan, who, having arrived In Delhi the day before from Germany, was to meet us right outside of the terminal. Somewhere among this throbbing mass was Susan. The million dollar question was, “Where?” Thankfully, she spotted us pretty quickly. In the meantime, every taxi driver within sight pounced on us, offering to take us to our hotel. Susan, however, had already lined up a cab, so we started walking toward the area where our taxi was waiting. Along the way, hordes of men and a rag-tag group of little boys, some as young as 6 or 7, followed us and tried to take our gear – not to steal, but to carry, which would then have necessitated us giving them “baksheesh,” or a tip. Well, since each of us only had our backpack (except Debbie, who had her enormous rolling duffle) and a daypack, we did not require their services. Though once we got to the taxi, the little boys grabbed our bags and handed them to the touts who were securing them to the roof of the cab. Little did they know that there would be no baksheesh, as we had no Indian rupees yet to pay them! (Only Susan had rupees, and she paid the taxi.)

The taxi ride from the airport to the hotel was about as harrowing an experience as I have ever had as the kamikaze driver drove through Delhi roads that were packed, even at this time of night. Cars, trucks, motorcycles, and auto rickshaws were driving 3, 4, even 5 abreast on the 2-lane road. At regular intervals, vehicles traveling in the wrong direction came right at us, swerving at the last second to avoid a collision. Our taxi driver was unfazed; however, we, his passengers, were speechless as we sat there white knuckled with our eyes alternating between wide open and squeezed tightly shut. We hit a traffic jam and came to a dead stop. Not to be deterred, our driver jumped the median and started driving in the oncoming lanes toward our hotel. It was then our turn to dodge the oncoming vehicles. At this point, I kept my eyes permanently closed; I did not want to see the moment before death! At last, our driver turned off of the main road and onto a side street, and a little ways down was our hotel. We had survived!!

We stayed at the Westend Inn. Susan had checked-in the day before, and Debbie and I were sharing a room with her. After Betty and Rick checked into their room, we all headed for the hotel restaurant, which was still open at 11:00 p.m., and ordered dinner. There were a bunch of young men hanging around, and they started talking to us, especially to Susan. After dinner, Susan, Debbie and I returned to our room, which now had a cot in it for me to sleep on. For some reason, me sleeping on a cot seemed really funny and we couldn’t stop laughing at the idea. I think we were slap happy from the 22-hour flight from the U.S. to Delhi. As I was washing up before going to bed, I blew my nose and what came out was already black! 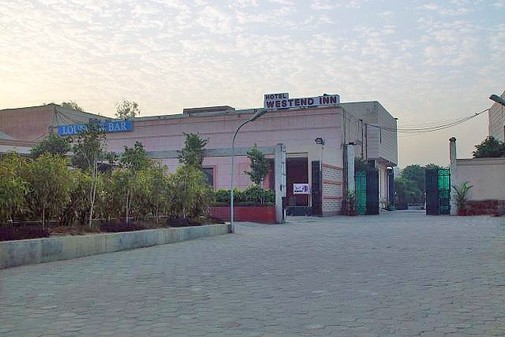 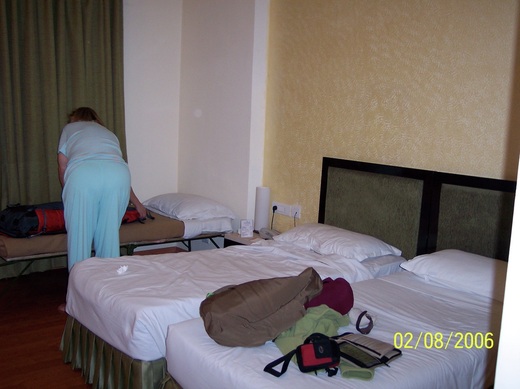 Me and my cot at the Westside Inn.
The next morning, we had to rise early in order to get to Delhi's Palam Airport, which handles all domestic flights in India, by 7:45 a.m. Our Air Sahara flight from Delhi to Cochin, via Hyderabad, was scheduled to depart at 9:55. After a 3-hour flight delay, we finally boarded. The flight attendants served everyone a lemon drink before we took off. I had a window seat, and as I looked out, I noticed duct tape holding together something on the wing. Not too reassuring! 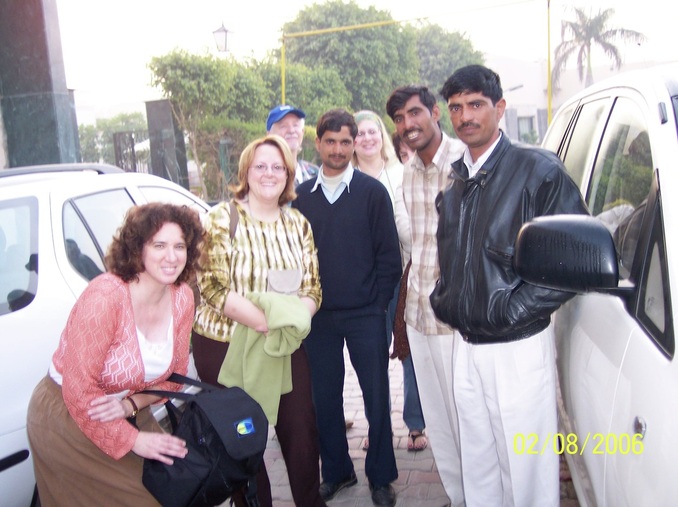 We are leaving our hotel in Delhi for the airport. Even though this photo says the 8th, it was really the 9th. India is 11-1/2 hours ahead of the U.S. 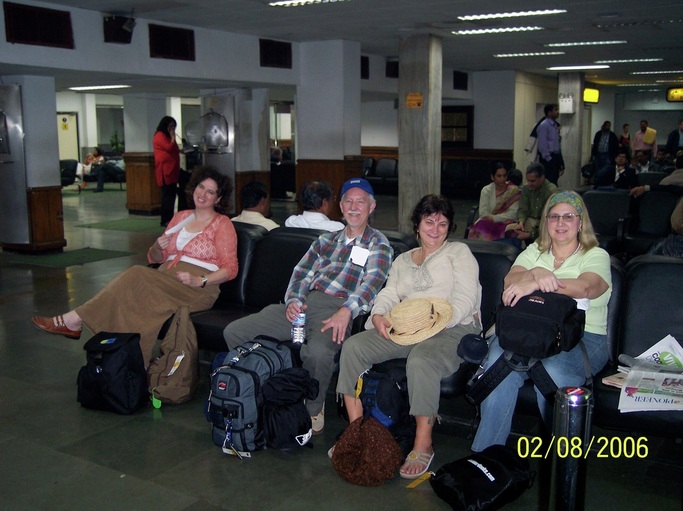 February 9. Waiting at Palam Airport to cath our flight to Cochin.
Our plane was supposed to land in Cochin at 2:45 p.m., but we actually arrived at about 6:00 p.m. We needed to get some rupees before we left the airport, but the money exchange was closed in the domestic terminal, so Betty, Debbie and I walked outside to the international terminal.  The uniformed airport guards wouldn’t let us into the international terminal because we didn’t have our flight ticket stub, but they did ask to see our passports!  It was just the tiniest bit tense because I was not yet familiar with how Westerners were viewed by Indians.  Then Betty started to give the guards her two-cents worth about how they “sure don’t make it easy for people to get money.” Anyway, we returned to the domestic terminal without having exchanged any money, just in time to see Rick and Susan exit with our taxi voucher.

(Something interesting to note here: Unlike in Delhi, where, the instant we walked out of the airport, dozens of men – and a few small boys –converged on us to "help" us with our bags and followed us the entire time, we had no one approach us when we arrived at the Cochin Airport.)

The ride to our Cochin hotel was not quite as harrowing as the drive to our hotel in Delhi, but it was still definitely a game of “chicken.”  During the 30-40 minute ride, we just kept driving through streets thronging with people and vehicles.  I think I had prepared myself well for what to expect because I wasn’t overwhelmed with everything (like most travel guides warn people traveling in India to expect).  However, there was so much going on around me that I couldn’t take it all in.  Do I watch the traffic, of which I was a part, or the buildings and landscape, or the endless sea of people?