I woke up feeling much better this morning, but still not 100%. I had toast and hot tea for breakfast in the hotel cafeteria. We left the hotel at 9 a.m. in two Jeeps for Ranthambhore National Park. We stopped along the way for lunch on the side of the road. I had only a banana and cookies since I had no appetite. I slept a good deal of the drive, but did happen to wake up in time to see another funeral procession. This time the body was wrapped in brightly colored cloth and was covered with flowers. Four men carried the body on a pallet.
We stopped along the way to Ranthambhore at Sawai Madhopur. The Ranthambhore National Park spreads over 400 square kilometers of dry deciduous forest in the Sawai Madhopore district of southeast Rajasthan, one of the finest natural tiger habitats of the world. Creating the national park, however, meant that the villagers, whose ancestors had for centuries lived within the environs of the park, lost their homes and had to be resettled. Though these villagers were settled in areas just outside the park, they lost their access to wood, water and traditional farming lands. As an initiative to help support these villagers, the Ranthambhore Foundation was created with the objective of acting as a catalyst in rebuilding the displaced communities’ social and economic foundations by developing an income generation program for the villages’ crafts people, particularly the women.

My travelling companions and I visited the women’s cooperative, called Dastkar Kendra, at Sawai Madhopur. The coop provides an income to over 100 women in traditional crafts, such as block printing, tie-dye and patchwork. We saw one group of women tie-dying odhanis, colorful veils that cover the head, which another group of women then embellish with sequins. The traditional Sawai Madhopore black and red odhani has been developed in the colors of purple, green, yellow and orange, as well as a natural dye range in indigo, beige, brown, grey and fawn. (A Dastkar Kendra odhani featured prominently in Mira Nair’s international award-winning1992 film, Mississipi Masala.) We saw another group of women hand sewing the sequins onto the odhanis. Another group of women was block printing animals onto fabrics. I bought a beautiful long-handled tote bag with zigzag designs, elephants and tigers block printed onto the fabric. 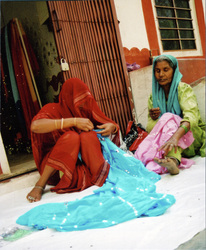 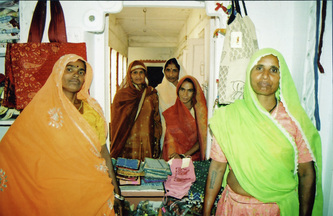 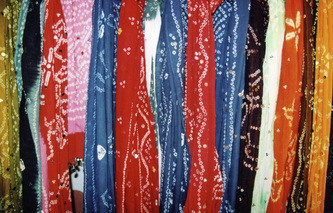 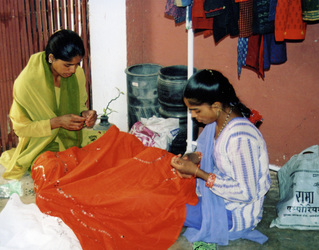 At about 1:45 p.m., we arrived at our hotel, Ranthambhore Bagh, a 12-room lodge located in Ranthambhore National Park. (There are also “luxury tents” one can stay in, but we stayed in the lodge.) It was a cute place, but the best thing about it was no bugs in the bathroom! However, to get to the toilet, one had to go through the shower, which seemed to be a common theme in India. 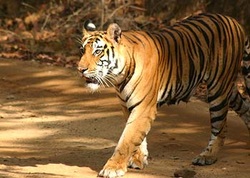 Tiger at Ranthambhore
At 2:15, we climbed into a huge, open-topped truck – called a canter – for a game drive through Ranthambhore National Park, which is located in the Ranthambhore Tiger Reserve. Ranthambhore was originally a hunting ground for Jaipur’s maharajas until 1970. It became a Project Tiger Reserve in 1973. Unfortunately, poaching of tigers for the Chinese medicine trade is a huge problem to date in Ranthambhore. In the early 2000’s, it was estimated that there were 42 tigers in the reserve. During our game drive, we will be on the hunt for these ever-elusive  tigers. Besides myself and my traveling companions, there were about 10-15 additional people in the truck. In addition, the truck was extremely loud, so I knew we were most likely not going to find any tigers. And I was right! We saw several types of deer and antelope, peacocks, mongoose, monkeys galore and the very cute-looking Indian squirrel, which looks like a large chipmunk. We even saw the very curious looking Rufous Treepie, which were flying all over the place. But no tigers! (Obvioiusly, I did not take the photo of the tiger for this blog posting.)

All of a sudden the skies opened up and it began to thunder and rain – a very cold rain – during our game drive . By the time we got to shelter, everyone was soaked. The shelter was a large building, and it soon filled up as other canters carrying park visitors arrived with their charges to get out of the rain. The building housed an exhibit of tiger pictures and artwork. We stayed there until the rain stopped, but it started again once we resumed our game drive. 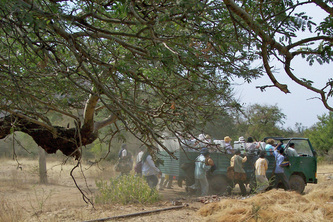 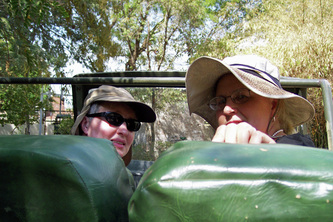 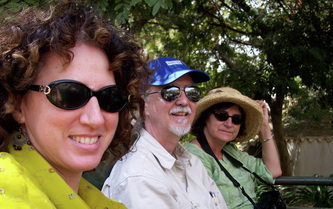 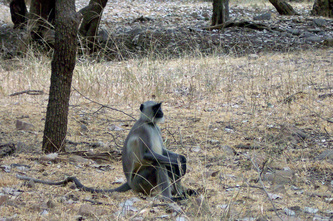 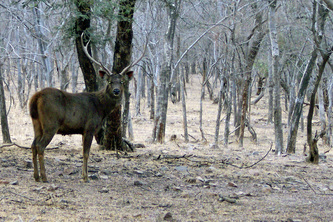 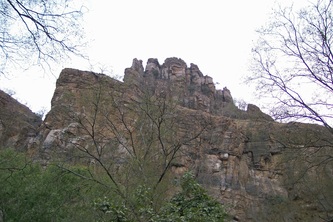 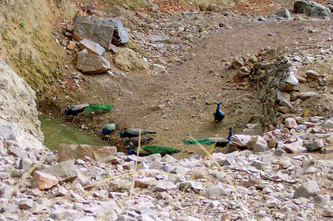 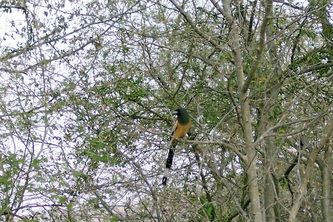 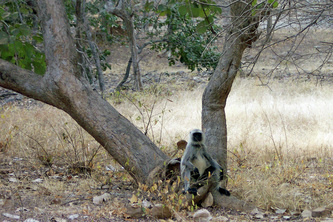 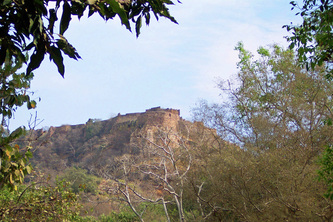 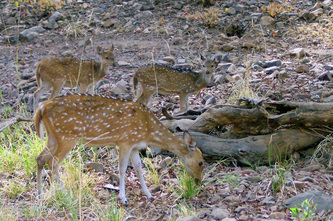 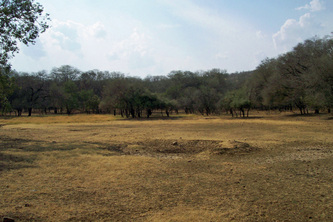 Dinner was at 8 p.m. On the way to the restaurant, we passed another groom on the way to his wedding. We passed the wedding “hall,” and it looked like a carnival with all of the bright lights, music and decorations. It would have been fun to go to an Indian wedding just for the experience.

For dinner I had a grilled cheese sandwich and finger fries (French fries). Nice, homey foods. During dinner, some of my traveling companions decided to go on an early morning game drive to try to see a tiger; I was asked to join them, but I chose not to. Betty was unaware that these plans had been made, and when she found out she lost her temper and put on quite the show, despite the fact that she had no desire to join them. It was embarrassing and I felt embarrassed for her.