Sunrise Over the Taj Mahal 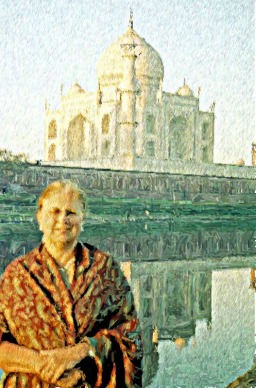 I got up and left for the Taj sunrise at 5:45 a.m. My fellow traveling companions and I walked down the dirt lane next to the Taj, which came out behind the Taj compound on the bank of the Yamuna River.  Along the riverbank behind the Taj was so much trash.  It was such a stark contrast to the beauty of the Taj Mahal.  We were to take a pole boat across the river for the best view of the sunrise, but our “poler” was nowhere to be found.  While we were waiting for him, many men came to pray at the small temple that stood on the riverbank next to the back wall of the Taj.  Finally, our “poler” arrived and we all climbed into the large pole boat for the short trip across the Yamuna River to a sand bank.

Once on the other side of the river, I attempted to take some photographs of a young boy (maybe 12 years old) riding on a camel.  When he noticed, he rode up to me and demanded money from me for taking his picture.  I refused and resumed taking photos of him, but then he started chasing me on his camel.  It was pretty scary, and in the end I gave up trying to get any more photographs of him.

The sunrise over the Taj Mahal wasn’t that spectacular, but I did got some great photos of the Taj reflecting off the river. 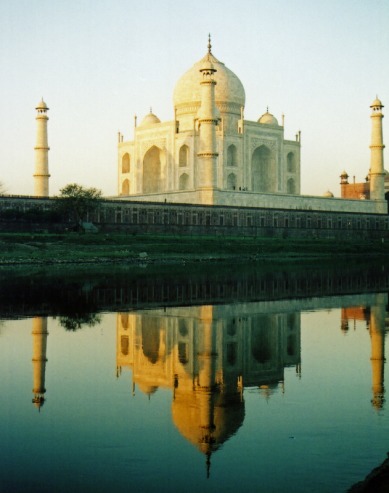 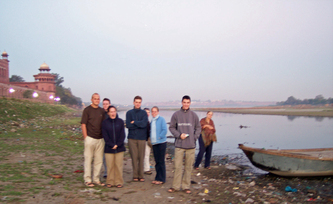 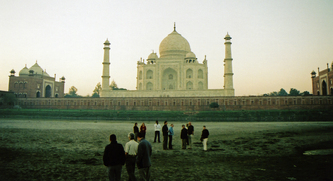 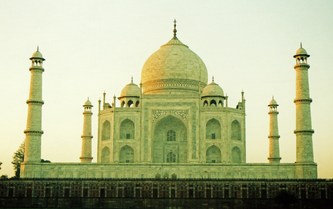 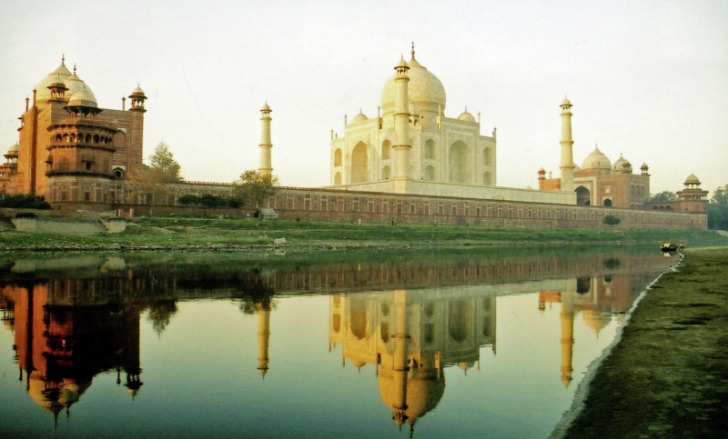 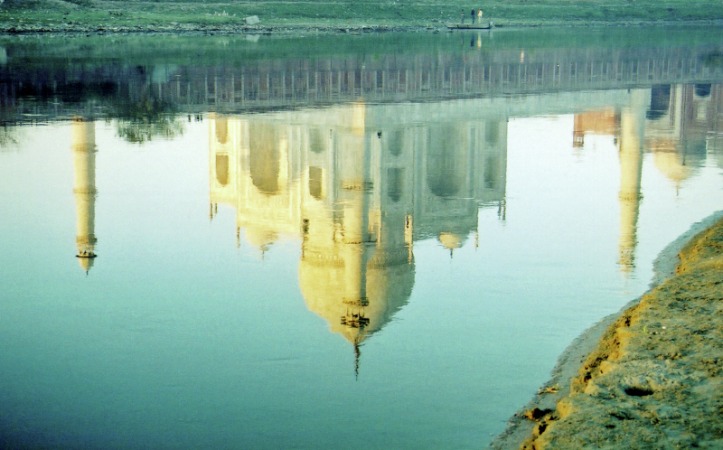 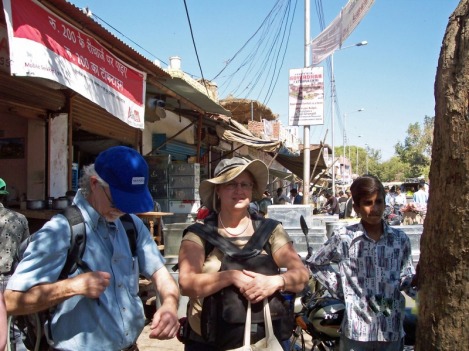 In the town of Fatehpur. It was the filthiest Indian town I had been in.
Back at the Sheela Hotel, I had a quick breakfast of scrambled eggs and toast.  We then grabbed our backpacks and hopped into the “vans” for the short trip to the local bus station for our ride to Fatehpur Sikri. The seats on the bus were very narrow, and leg room was non-existent.

We arrived in the small town of Fatehpur at about 11 a.m. We dumped our luggage in a second story room at a local hotel.  (By “local” I mean that no sane Westerner would ever in a million years stay there.)  We left the hotel and walked through town toward the historical city of Fatehpur Sikri.  This was the dirtiest town I have been to yet.  Besides all the normal stuff (trash everywhere, cows and other beasts freely roaming the streets, etc.), this town had a SERIOUS fly problem.

We had a terrific guided tour of Fatehpur Sikri.  The place was super cool!  Many of the buildings were in very good shape, but there were also a lot of ruins.  And, it was sprawling over many acres.  We were not able to see it all in the 3 hours we were there! 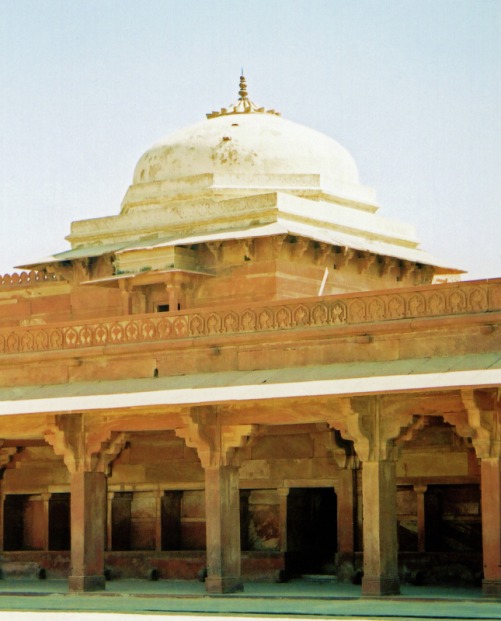 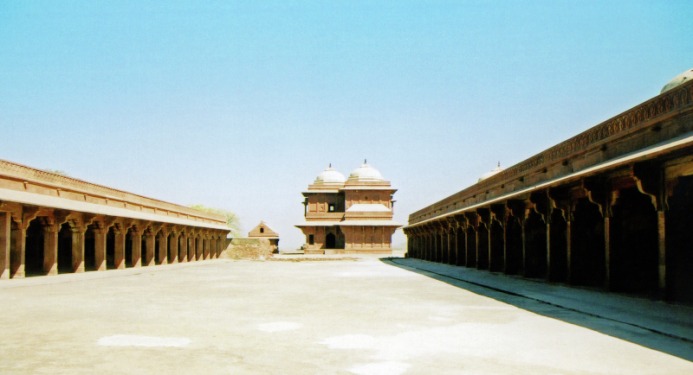 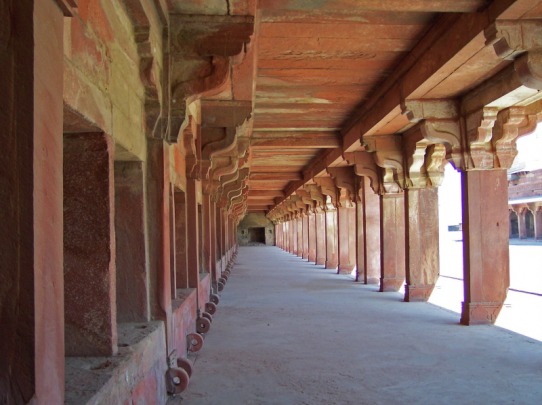 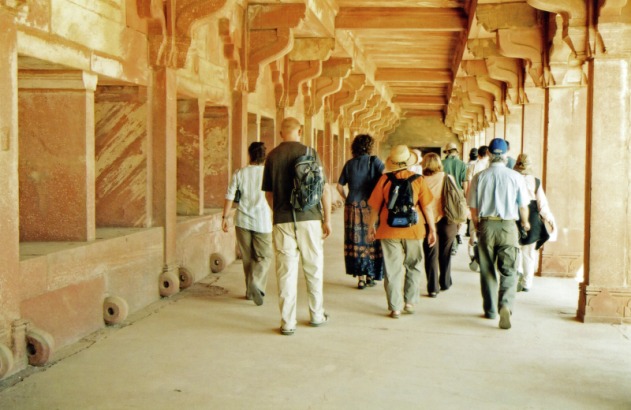 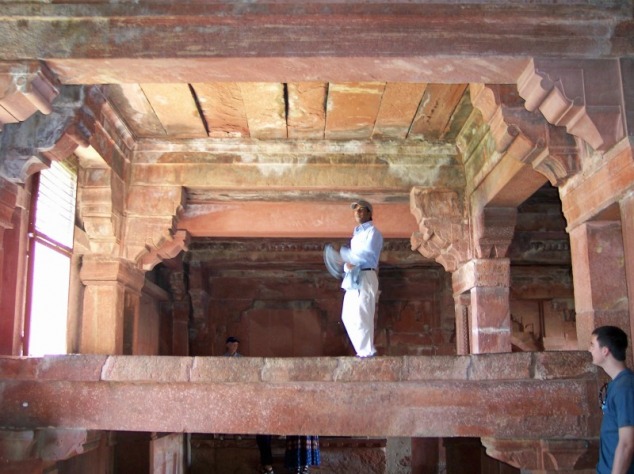 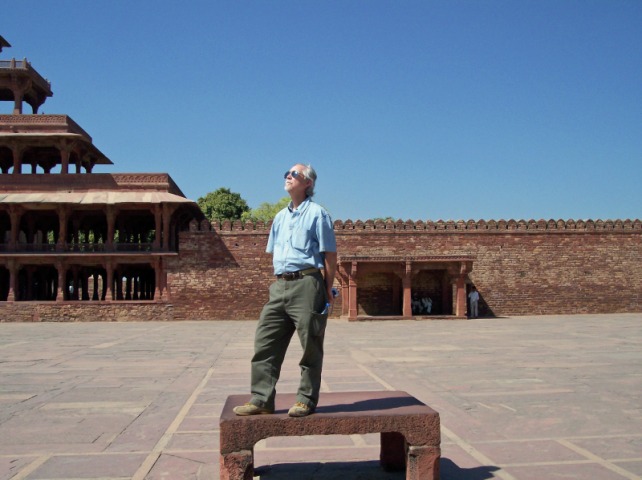 While at Fatehpur Sikri, I got very upset because we came across a small puppy running through the compound yelping because it had something stuck in its mouth and no one was attempting to help it.  Finally, some gardeners approached the dog (probably because I was so visibly distraught) and managed to remove the object from its mouth, after which the puppy seemed to be okay.  It then started to follow me around Fatehpur Sikri, and I felt that I needed to rescue it from India and take it home to the U.S. with me.  My traveling mates encouraged me to do so, too!  Needless to say, I did not leave Fatehpur Sikri with it.
After leaving the abandoned ghost city of Fatehpur Sikri, we visited the Dargah Mosque,  which towers over Fatehpur Sikri and is said to be a copy of the mosque at Mecca.  Built in 1571, The outside was beautiful, but again the inside was unimpressive, probably because it was a HUGE open space with nothing much to see.  There was, however, a striking building inside the mosque: the tomb of Sufi mystic and saint, Salim Chishti.  Exquisite marble serpentine brackets and almost transparent lattice screens carved from marble surrounded the inner tomb, which had a sandalwood canopy inlaid with mother-of-pearl.  At the tomb, visitors can make a wish while tying a black cotton thread onto the screen around the tomb, and then leave confident that the saint Salim Chishti will make the wish come true.  While all of my traveling companions each made a wish, I didn’t participate because I knew it would offend God, who controls everything in life.  Nothing happens by chance, or by “wish.” 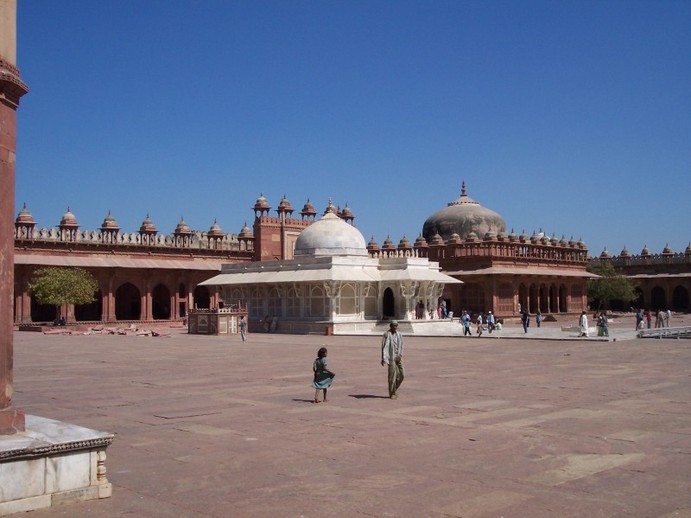 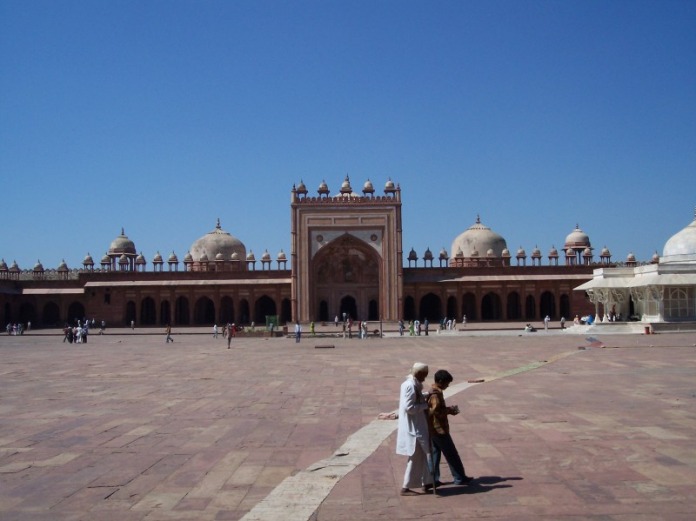 Also part of the mosque complex is the Buland Darwaza, which towers 15 stories above the courtyard of the mosque. It is said to be the largest of gateways in the worldand is also known as the "Gate of Magnificence.” It was built by Emperor Akbar in 1572 to commemorate his conquest of Gujarat. A Persian inscription on the eastern archway of the Buland Darwaza records Akbar's conquest over Deccan in 1601 A.D. An Islamic verse from the teachings of Jesus Christ was also included in the inscriptions on the gateway revealing the religious tolerance and broadmindedness of Akbar. It is written in Persian and reads "Jesus, Son of Mary (on whom be peace) said: 'The world is a Bridge, pass over it, but build no houses upon it. He who hopes for a day, may hope for eternity; but the World endures but an hour. Spend it in prayer for the rest is unseen. ' " Here is the original verse in Persian- 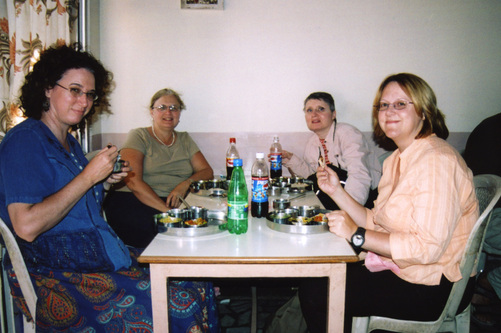 Eating our delicious thalis inside the most horrendously, filthy restaurant in Fatephur.
Afterwards, we walked back to the hotel where we were storing our gear and had lunch – a  surprisingly delicious thali – in the hotel’s filthy, fly-infested, hole-in-the-wall restaurant . The proprietor, however, was a very humble,  gracious man.We then retrieved our bags from upstairs (thank goodness we weren’t staying overnight there) and boarded  our own private BIG bus to Bharatpur in Rajasthan.

Bharatpur is famous for the UNESCO World Hereitage-listed  Keoladeo National Park, a bird sanctuary featuring over 360 bird species. Once  we arrived in Bharatpur, we checked into our hotel, The Birder’s Inn, which was the BEST place we had stayed at in India so far. LouAnn  and I had a beautiful room, and the grounds were also gorgeous. 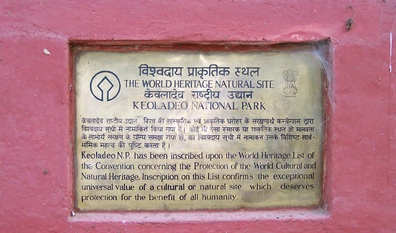 After getting settled in our hotel  room, LouAnn and I left the hotel, climbed aboard a bicycle rickshaw and were “chauffeured” to the Keoladeo bird sanctuary. Once we arrived at Keoladeo, however, LouAnn decided she didn't want to have to give a tip to the  rickshaw driver, so she got out of the bicycle rickshaw and walked along the paths instead of riding, so I had my own personal rickshaw.

At this time of year, most of the birds in Keoladeo were located in the wetlands section of  the sanctuary, and I saw lots of water birds as well as several owls and the  beautiful green parakeets that are so common in this part of the country. Oh, and a couple peacocks. While the sanctuary itself was very peaceful and beautiful, it was somewhat dissapointing in that I didn't see a greater variety of birds -- and none close-up enough to get any good photos. 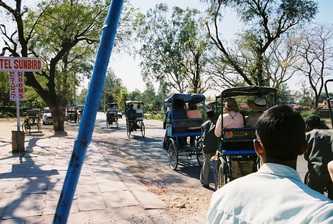 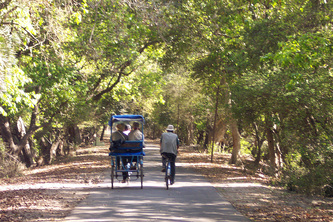 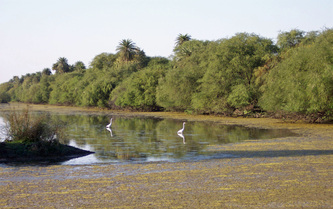 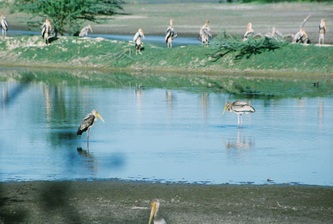 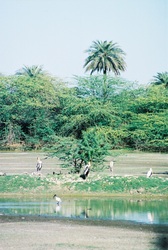 We had a very tasty buffet dinner at the hotel. We celebrated Debbie's 44th birthday with a cake that said "Happy Birth Day Devoran," and then Chandra bought us all a whiskey. 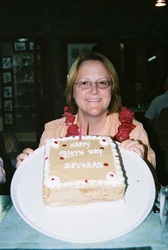 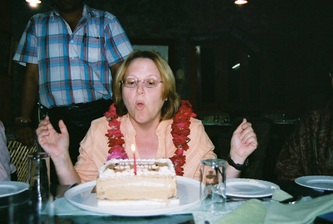