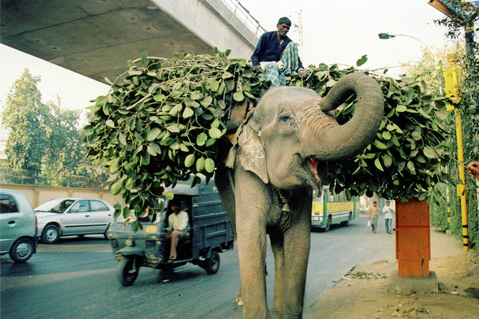 I got up this morning at 7:00 to shower and dress. I was scheduled to meet Chandra at 8:00 so we could go to the bank ATM. I needed to get some rupees to give him for my local payment since the serial number on my US $100 bill began with “CB,” and bills beginning with this serial number are not accepted in India. (Supposedly there are counterfeit $100 bills being passed in India. They are coming from Japan, and they all start with CB. So no one in India will take these particular bills.) The walk to the ATM was quick and we were back in ten minutes. During our walk, I complimented Chandra on his English; he said that it was not that good, but it was. I asked him if his children knew English, and he said that they would begin learning it when they were about ten years old. When I asked him how old his children were, he said that the oldest was seven. I thought to myself, seven children under seven years old; they are all very young. When I questioned him, he admitted that he really only has one wife and two kids, but he likes to tell people at first that he has five wives and seven children because he gets a kick seeing the surprise on their faces. “Funny man,” I told him.

After returning to the hotel, Chandra and I joined the rest of our traveling companions and walked down the street to catch a bus to Old Delhi. On the way, we walked past a work elephant loaded down with green, leafy branches just lumbering along the road along with all of the motorized traffic! The elephant’s head was painted with designs, and I took a couple photos. Then the bus came and we all got on. I got one of the few empty seats, but most of the others in my group had to stand.

We got off of the bus in Old Delhi and walked to India’s largest and best-known Muslim mosque, Masjid-i-Jahan Numa, or as it is more commonly called, Jama Masjid. This grand mosque, with its three imposing black and white marble domes and twin minarets framing its great central arch, was constructed by the Emperor Shah Jahan, the same one of Taj Mahal fame. Depending on who you talk to, the mosque was built between 1650 and 1656 or 1644 and 1658, though there's no dispute the it took 5,000 workers to construct at a cost of nearly a million rupees, quite a lot of dough some 360 years ago. A splendid flight of sandstone steps leads to the imposing arched gateway entrances. The huge courtyard can accommodate 25,000 people for Friday prayer sessions. Upon leaving the Jama Masjid, I had to go to the bathroom, and since there were no bushes to duck behind among the sea of people, I asked one of the mosque guards if there was a toilet I could use. At first the guard refused to let me use the facilities, and I had to beg. He finally relented, but I had to walk forever to get to it.

(A couple months after I visited Jama Masjid, two explosions occurred inside the mosque, and a bunch of people were injured, though no one was killed. It is believed that the explosions were the acts of terrorists, but no group has claimed responsibility.) 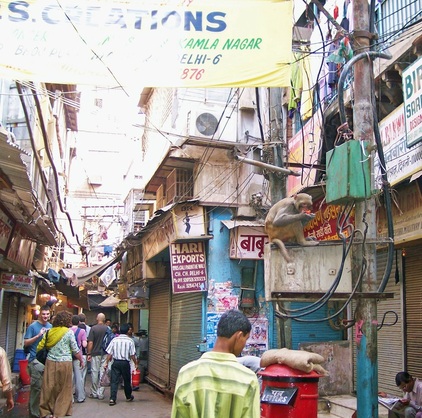 Walking along the narrow streets of Old Delhi. Can you find the monkey?
Once I relieved my bladder, it was back to the crazy Delhi streets.  They were very narrow and extremely congested with people, animals, bicycles and the odd motorbike. I could see why visitors to India could become completely overwhelmed if they hadn't studied up on the country before they arrived. The noise, smells, stares! Lou Ann and I climbed onto a bicycle rickshaw for a ride through Old Delhi. After only a short while, however, our driver, who was trying to negotiate an extremely tight left turn, crashed into another bicycle rickshaw. The two rickshaws got stuck together, and there was a very loud confrontation between the two rickshaw drivers as we blocked the entire intersection, which was very cramped to begin with. Horns started blaring, and eventually a policeman came along to get everything straightened out, and we were once again on our way.

Speaking of policemen... It was slow going through the streets of Old Delhi, and my bicycle rickshaw was moving at a snail’s pace. We came upon a policeman “directing” traffic, though it was a completely useless task since wheeled traffic was pretty much at a standstill. When things finally started moving again and I was passing through the intersection, the policeman reached his hand into the cab of my rickshaw and pinched my thigh—hard! My immediate reaction was to blurt out in his face, “PIG.” He didn’t even look at me.

Lou Ann and I finally reached our destination and met up with the rest of our traveling companions. We were going to visit Sheeshganj Gurudwara, a Sikh temple. But first we had to get there, and that meant finding our way through the maze of Chandni Chowk, one of the oldest and busiest markets in Old Delhi. It was built in the 17th century by Emperor Shah Jahan, famed builder of the Taj Mahal.

We could barely move through the market area, which was packed with people shoulder to shoulder. Now I knew why we alighted from our bicycle rickshaw when we did: there was no way anything that size could maneuver through this mass of humanity! We walked on the so-called sidewalk, slowly making our way past the market merchants. To avoid thieves from pilfering any of my belongings, I wore my daypack on my front so that I could keep close tabs on it. Debbie, who was walking in front of me and jabbering away with Susan and Betty, was carrying a large purse that she had slung over her shoulder and which was an open invitation to any pickpocket that was nearby. I noticed a couple young men sidling up behind her and eyeing her bag, so I loudly said, “Debbie, it looks like someone may be about to steal something out of your purse. Carry it on your front.” She then moved her purse to her front and the men moved past her. Disaster averted!

We arrived at Sheeshganj Gurudwara, which from the outside was somewhat unimposing, except for the very beautiful gold domes on the roof of the building. The Gurudwara has an interesting history: On March 11, 1783, Sikh military leader Baghel Singh marched into Delhi along with his army.

(As a side note, a fascinating fact is that all Sikh men use “Singh” as their last name. This is because the Sikh guru Gobind Singh Ji did not believe in the Indian caste system, so by giving every man the same last name, equality was achieved for all Sikhs. Sikh women use the last name Kaur instead of Singh.)

Anyways, back to Baghel Singh, after he entered Delhi, the Mughal emperor Shah Alam II agreed to allow Singh to build shrines on Sikh historical sites. The site of Sheeshganj Gurudwara is where the ninth Sikh Guru, Tegh Bahadur, was beheaded in 1675 by the Mughal emperor Aurangzeb for refusing to convert to Islam, and thus, a shrine was constructed there. However, because of the unstable political climate during the next century, the site alternated between being a mosque and a Gurudwara, which is the word used for a Sikh temple and literally means “gateway to the guru.” After a prolonged legal battle between the two religions during the time of the British Raj, the site was given to the Sikhs. The present structure was added in 1930, and the gold guild of the domes was added over the next several years.