It’s almost 8 in the morning. I just spent my first night in the bush. What an exciting and frightening night. From the time I went to bed, the night sounds started. Elephants within 100 yards, hippos, monkeys, insects. Until I get used to it out
here, I will definitely not get a very good night’s sleep.

We had an incredible night drive last night – which, by the way, is illegal. But because there are so few visitors to
Katavi National Park, our armed guide let us do it. We drove along the edge of the flood plain. Many hippos had come out of the water and were grazing. They get quite agitated when the light is on them for too long, but we had no
problems. Other animals we saw were a lone zebra, civet, buffalo, genet, and the cutest little bush baby. The first animal we saw on our night drive was a large male elephant grazing in a small clump of trees. He looked at us for a minute and then went on eating. We watched him for quite awhile. Late on the drive, we saw 3 baby elephants running in to the woods – it was quite dark, so we didn’t get to see them real well. We ended our drive following a little field mouse into his hole.

Back at camp, we had fried fish, cauliflower, and boiled potatoes with homemade tomato sauce (kind of chunky like salsa, but much better). We followed it up with vanilla-lemon pudding. All made by John.

So now it is morning, and I am sitting at the remnants of last night’s campfire overlooking the floodplain. The animals are starting to return to the water. Another day in Africa. 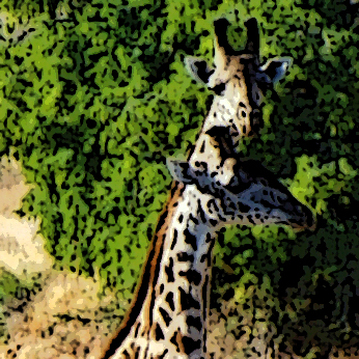 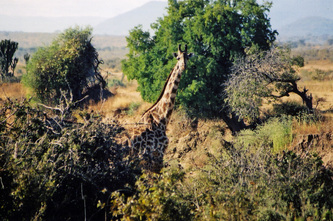 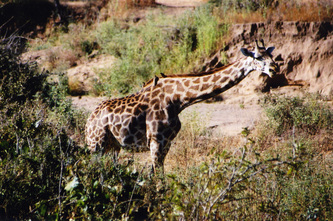 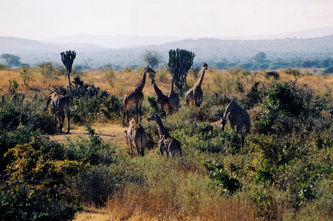 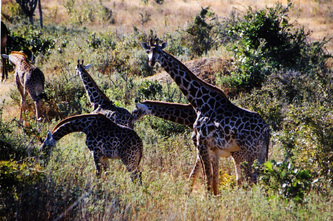 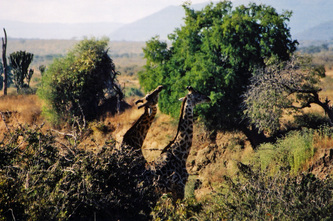 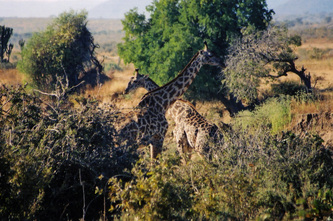 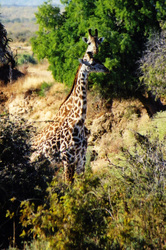 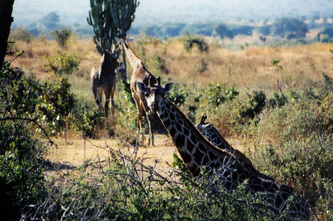 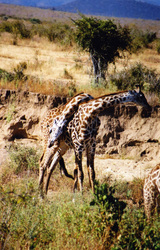 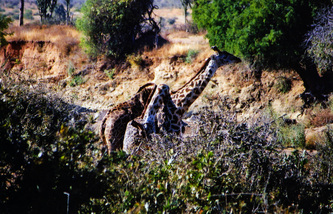 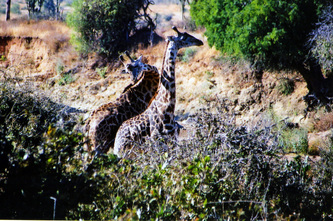 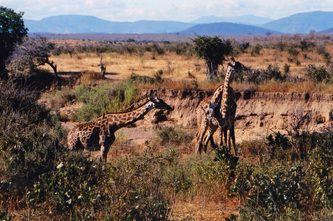 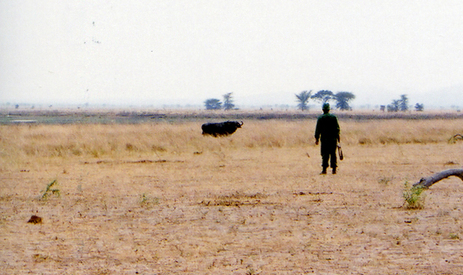 Richo at the ready with his AK-47... just in case.
We started out this morning on a game walk, but ran into an aggressive Cape buffalo coming from the woods to the floodplain. At first it did not appear to notice us, but then suddenly it turned and started walking toward us. We had our armed guide, Richo, with us, so we at first felt safe. The buffalo then became agitated and mock charged. At this time, I became quite alarmed and quickly relegated myself to a small clump of trees near the edge of the floodplain. It became a contest of wills – a standoff between the buffalo and us. The buffalo finally won as we retreated back toward camp.

The African or Cape Buffalo is not likely to win many beauty contests. But what it lacks in beauty, it more than makes up for in viciousness. Cape Buffalo are among the famous "Big 5" animals particularly prized by hunters beacuase they are so dangerous -- and, presumably, show the hunter's great courage as he shoots them from a distance with a high-powered rifle. (The other members of the Big 5 are elephants, lions, leopards and rhinoceros.) Reportedly, a Cape Buffalo that is wounded will circle around and begin to stalk the hunter, waiting for an opportunity to charge the hunter and gore him with its sharp horns. Under any circumstances, Cape Buffalo are best given wide berth. Despite their placid, cow-like appearance, Cape Buffalo (according to some) are responsible for more human deaths in Africa than any other large animal, though some say that hippos are the most dangerous while others argue for crocodiles. Best to avoid a run-in with them all!! 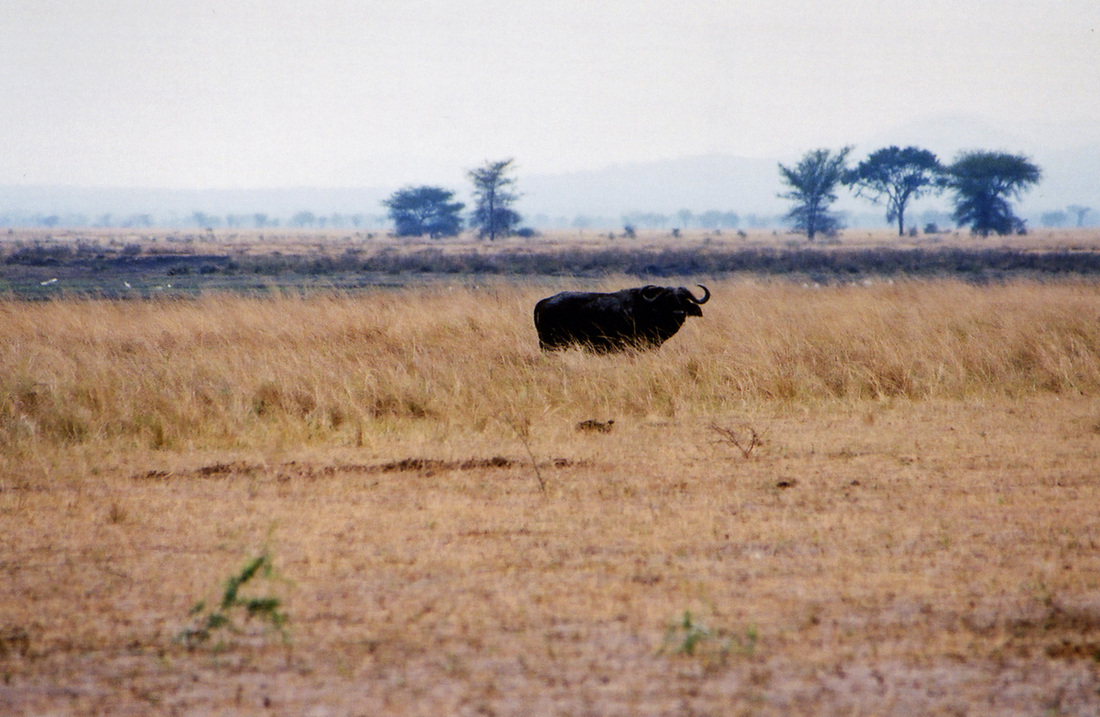 This lone Cape Buffalo was very much aware of us and was not happy that we had invaded his space. 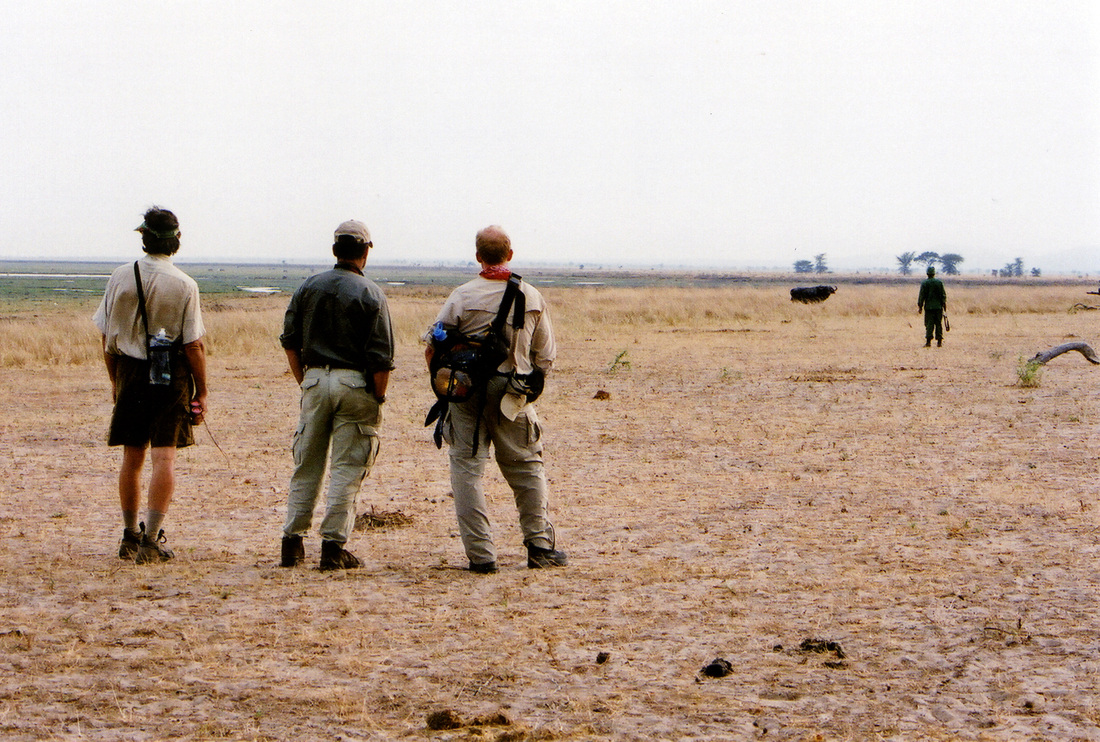 Derrold, Eddie and Matt look on a Richo gets closer. Richo was trying to scare the Cape Buffalo away so that we could continue our hike along the flood plain. 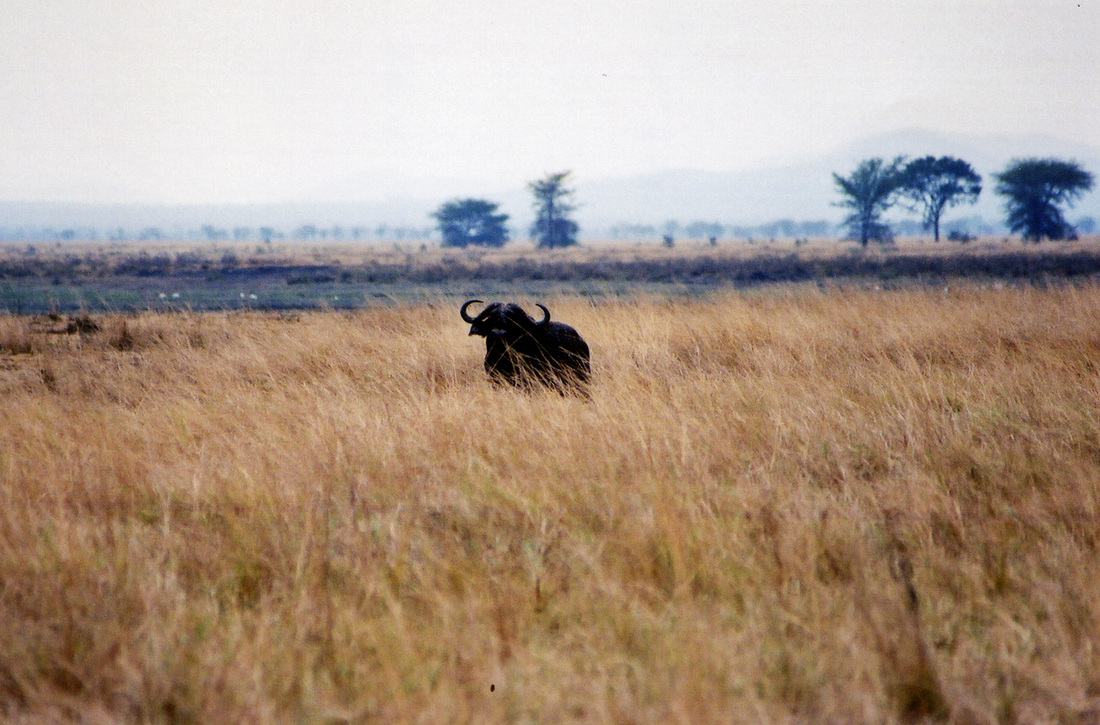 Becoming more agitated at us, the Cape Buffalo starts to walk toward us. It then mock charged at us! 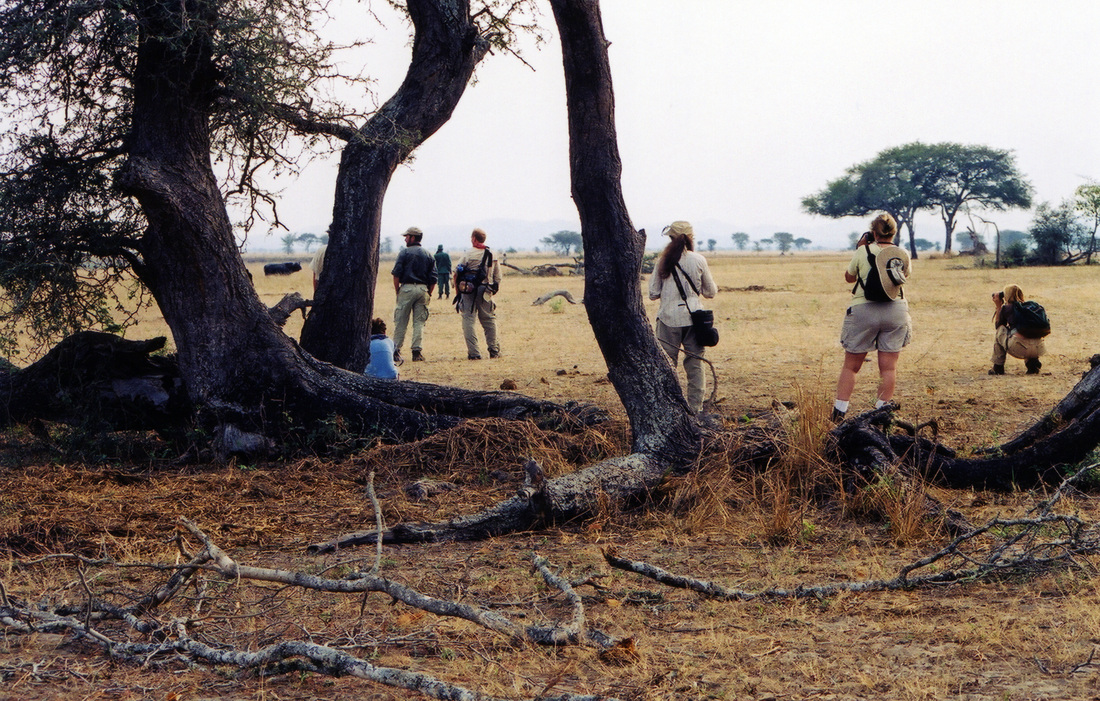 We all look brave here, but when the Cape Buffalo charged at us, I quickly ran behind this clump of trees. I'm not sure, however, how much protection they would have afforded if the buffalo really wanted to get at me!!
Eddie came down with the Land Rover and we all climbed on top to claim our spot for the game drive. As we drove along the edge of the floodplain, we saw many more Cape buffalo. There was also a massive herd on the other side of the floodplain. We also saw a lot of waterbuck and zebra. We saw three warthogs. As we approached the animals, they would become skittish and many would run off into the thick brush. There were two mama
buffalo with babies; they were too cute. In the distance – I could only see them with binoculars –I saw two eland. We saw the most incredible bird, a lilac breasted roller. It took off from a tree limb and dive-bombed toward the ground right in front of us. Its wings were spread wide open and they were turquoise edged in black. What a sight! 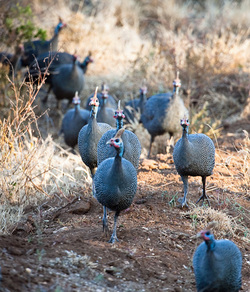 The comical guinea fowl.
A line of guinea fowl marched in front of us. What a comical spectacle! Eddie said they looked like a bunch of old women going shopping. They did!! Toward the end of the game drive, we saw a troop of vervet monkeys. The males have a bright blue scrotum and red penis. They were fun to watch as they jumped from tree to tree.

We are now back at camp, and the ornery buffalo is still hanging around.

After lunch, Eddie took us to see a python high in a tree. It was very difficult to see, even with binoculars. It was coiled in the crook of the tree around several branches. 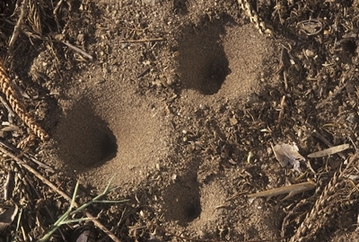 There’s a curious little insect in Africa called an antlion. It hatches from an egg in the sand. It then spends the first part of its life in the sand constructing an inverted cone-shaped hole in which it captures ants and other insects that fall in and eats them. The antlion develops in its sand home until it matures into a dragonfly-type flying insect. If sand is accidentally knocked into its cone home, the antlion will toss out the extra sand in a circular pattern until it has its perfect cone-shaped home again.

So, for fun, I pushed some sand into the antlion's "pit" and, sure enough, the strange-looking antlion immediately emerged from its hiding place and started removing the sand that I knocked in. In no time at all, its little home was all nice and tidy again! 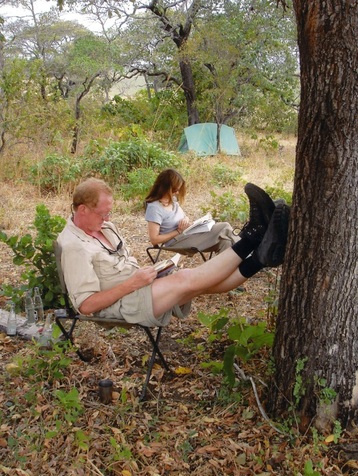 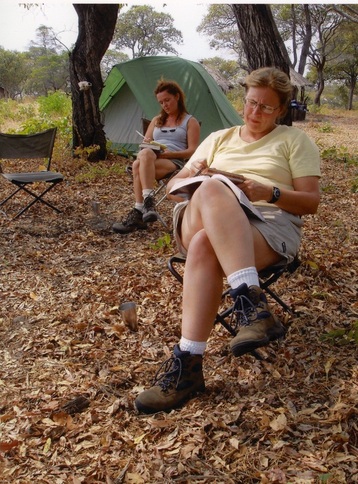 Me writing in my hjournal.
It’s now 4 p.m., and the woods are becoming alive with sounds – birds, insects, a hippo grunt. There is a cool breeze, but it just wafts through camp like ripples on a pond. It is so peaceful here.

I am filthy dirty. I cannot get myself clean. My feet are black from charcoal and my fingernails are embedded with dirt. Even a good scrub with the fingernail brush has not done any good.

The nights here are so black. Last night a huge fire raged on the horizon – many miles away across the flood plain. I could see the flow from the fire. The sky contains more stars than I think I have seen in my entire life.

We go on another night drive, and see we see:

– Egyptian vulture, which feeds mainly on carrion, but are opportunistic and will prey on small mammals, birds and reptiles;
– serval, a long (about 36”) slender cat-like animal with long legs, small head and short tail;
– giant eagle owl, over 2 feet tall with a 55-inch wingspan. We were lucky to have seen it because they are rarely seen; and
– oribi, a small antelope.