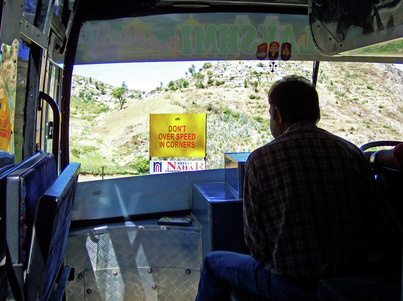 Watch out for the hairpin turns!
I got up at 4:50 a.m. (we were due to leave at 6:00) and took a HOT shower. YAY! It was hard to wash my hair, though, because the shower spray was next-to-nothing. But after 3 days of dirty hair, I had to wash it. The only thing that mattered was that the water was HOT. The temperature outside was cold, but, thankfully, not below freezing.

I got out to the minibus at 5:50 a.m. to get a good seat. It seemed that everyone wanted a good seat, so I had to go out early to get one. (The bus had exactly 13 seats, enough for each of us. However, one of the seats was broken, and it leaned way over to one side and bounced continuously.) I slept on the 3- hour drive down the mountain, but woke up often when the bus went lurching around any of the dozens of treacherous hairpin turns. We were on our way to catch a “deluxe motor coach” to Cochin, a 5-hour drive.

When I got my backpack off of the minibus at the station to get on the bus to Cochin, it had several large, dirty grease spots on it. I was angry because I could not put my pack on my back without getting the grease on my clothes,  and so I had to carry it. After a short while, Priya went into a nearby shop and bought some nail polish remover, which removed enough of the grease so that I could wear it. I didn’t know the name of the town (city?) that we were in, but the bus was due to arrive at 10:15 a.m. Since I didn't have any breakfast before I left Ooty, I stopped at a roadside stall and bought some cookies from a jar that not only housed the sweet treats, but was apparently also home to a couple dozen flies. YUCK! Unfortunately, I had to use the toilet in this town, and it was by far the FILTHIEST public toilet I have ever come across.

The “deluxe motor coach” arrived early, and I got a seat with Kevin in the second row. The “DMC” had no bathroom, no a/c, and the fans didn’t work. It was stifling hot inside the bus. I tried to sleep, but between the heat and the lurching of the bus, sleep was impossible.

We stopped for a 10-minute lunch break at noon. I scarfed down a vegetable biriyani served with red onions in a yogurt sauce (the onions in India are much milder than in the U.S.) and hurridly used the lone toilet located in a tiny, wooden, roofless shack behind the restaurant before I jumped back on the bus. Kevin was MIA as the bus started to back-up, but he hopped on just in time.

We got to Cochin about 30 minutes ahead of schedule. We disembarked the bus and walked a short distance to The Grand – the same hotel we stayed at when we first arrived in Cochin 2 weeks ago. This time around I roomed with Susan because Debbie was still coughing. I washed my 3 pairs of pants in my hotel room sink (they were absolutely filthy -- that is, my pants), but then I got concerned that they wouldn’t dry by the time we were to leave Cochin the following day. So, I had the hotel staff come to get them to dry and press. They must be back by noon the next day.

I had to buy a duffle bag to carry all the things I had bought in India. It’s a piece of junk, but it was cheap.

At 7 p.m. I met the gang in the hotel restaurant for our least dinner together. Nine of us were going on the second leg of the trip, but Ann, Bill and Kevin were not. Emma and Ben were flying to Delhi, while Rick, Betty, Susan, Debbie, Angela, Paul and I were riding the train, which was to take 3 days/2 nights. Priya also was not joining us, so we were to have a new guide for the northern part of our trip.
NEXT: COCHIN, INDIA TO DELHI, INDIA