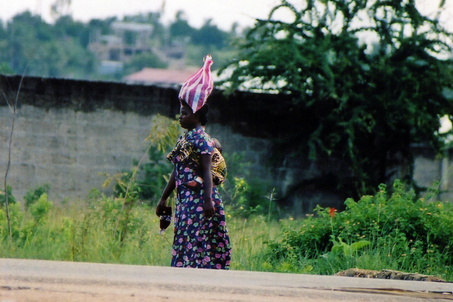 That's a baby on her back.
I met Matthew and Susan this morning. Matt is a litigation attorney from New York City (lives in Hoboken, New Jersey)
and Susan is a Hollywood exec turned massage therapist.

Breakfast was yummy – Spanish omelet, toast, fruit (papaya, pineapple and watermelon), the most fresh-squeezed orange juice I have ever tasted, and instant coffee with sugar (no milk as it is most likely unpasteurized). We hadonderful conversation with the rain pouring all around us.

Moses picked us up at 11 am in the Land Rover and drove me and Betty to the American Embassy (everyone else stayed in the L.R.). What a stark contrast to the rest of the city! The Embassy compound was so protected; we had to pass through several checkpoints. We used their bathroom, and it was like we were in the U.S. We registered with no problems and then left. I didn’t see one American while we were there; every employee was foreign (by "foreign," I mean non-American)!!

Moses took us to a craft co-op while Christy went to find a cyber café. The co-op was much, but I did buy a few things there, including a tingatinga painting. Tingatinga is a traditional style of Tanzanian art that uses very vibrant enamel paint. The paintings are usually very childlike – simple, yet pleasing to the eye. Animals or people are a major theme in Tingatinga paintings. 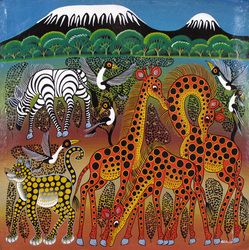 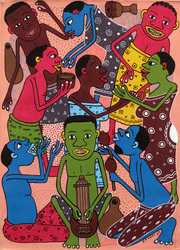 After a few beers (not me, though), we left for the Kariakoo Bazaar – a huge outdoor craft complex of small huts and a gazillion Africans. This, obviously, is a huge tourist market as there were many white people. The rain had stopped by now, but everywhere was mud, mud, mud! John told us to bargain – if it was 50,000 tsh, then offer only half. I am not a good bargainer, but I did manage to get 30-40% off everything I bought. There were literally hundreds of stalls, most selling the exact same thing. I saw a painting of an elephant and baobab tree that was quite beautiful; the seller said it was 75,000 tsh. I told him I would think about it and come back. He pretty much followed me around the entire bazaar. I finally got it for 40,000 tsh. I then ran out of money! 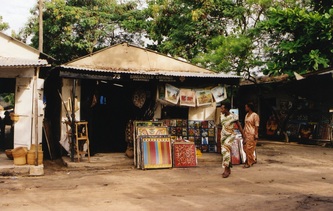 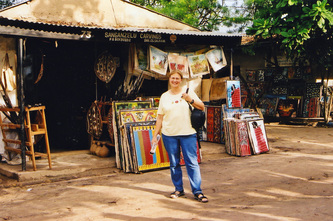 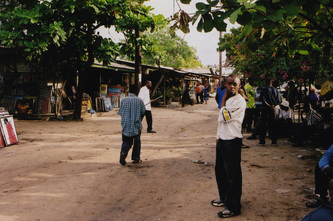 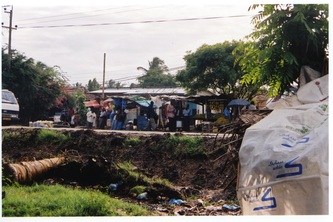 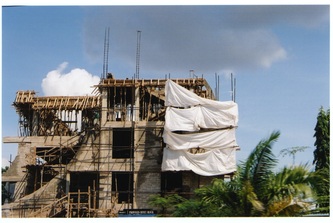 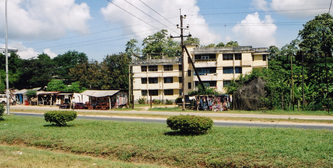 Back in the Land Rover, we drove to the Swiss Rest House. A guard opened the gate for us, and we drove around back to an “outdoor” restaurant – a large thatched-roof building on stilts with the sides completely open. We sat under a  large canopy in front of the building. It was late afternoon and there were thousands of birds flying into the trees for the evening. We ordered calamari – which was quite good – and beers, except that John, Moses and I had Cokes. It has become apparent that Betty and I are the least traveled among the group of Americans. Several have been to India, and a couple to Africa before (Gail six times). That’s okay, though; our fellow travelers have some great  stories!

about solving mysteries. I haven't read this particular book, but I have heard of it and hope to borrow Matt's book once he has finished it. 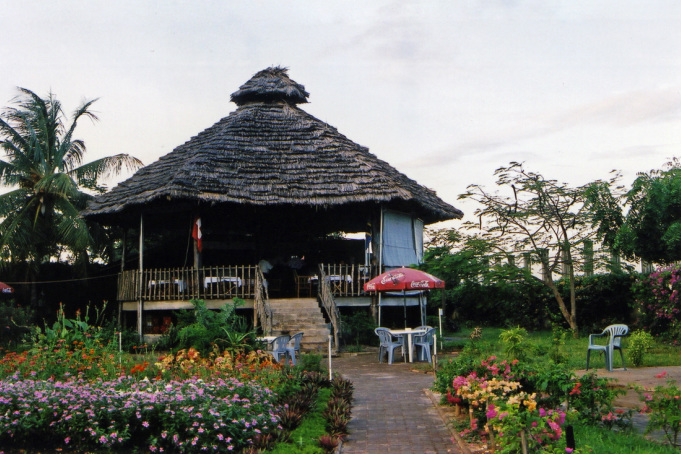 Swiss Guest House
We returned to the hotel at 7 pm, and are going to dinner at 9 pm – hopefully! The electricity just went out – typical, I guess, for Africa!

Dinner was chicken curry. It was very good, but very boney. Before dinner, we went to the bar and everyone drank – I only had a glass of wine. Gail
told us about how the wild animals sometimes come into camp at night while everyone is sleeping. She said that as long as everyone stays calm, they won’t bother us in our tents. She said that even elephants have come through camp. I got slightly “freaked out” to think about this, and then
had a nightmare during the night –

I was in my tent when something started knocking into it. I opened the tent flap and Slippers, my cat, ran in, her fur covered with little red spiders.

Could this be a harbinger of thigs to come? I certainly hope not!!

Matthew is reading the No.1 Ladies' Detective Agency by Alexander McCall Smith, and so we talked about these series of books. They take place in Botswana and the protagonist is Precious Ramotswe, the country's first female private detective, who goes 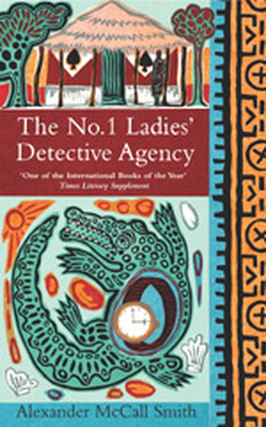 The cover of The No. 1 Ladies' Detective Agency, which, by the way, features tingatinga painting.
Betty and I returned to our room around 11 pm, and I read for about 10 minutes. I am too tired, so I am going to go to sleep now.