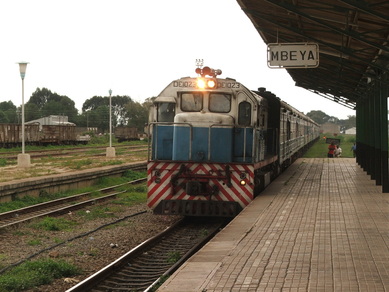 Mbeya Rail Station
We arrived in Mbeya early Wednesday morning and were met at the train station by the rest of our fellow expeditioners -- Eddie, Derrold, Debbie and John, our cook. I was really excited to meet everyone, and right away I knew this was going to be a great adventure! Our expedition leader, Eddie, is very handsome with his weathered looks and ready smile, and he has a very slight South African accent. Derrold looks like a grown-up hippie, with his scraggy hair and bushy mustache. He is a scientist and has brought his laptop loaded with the most up-to-date GPS maps of Tanzania; without Derrold, we would not know where we were going. Debbie, who had traveled with Eddie on a previous expedition, had met up with Eddie and Derrold in Zambia, which is pretty close to Mbeya, to pick up our expedition vehicles -- a custom fitted Land Rover and a very large pick-up truck that has been modified into a fully operational chuck wagon. And John, our Kenyan cook, was going to be using that chuck wagon every day to prepare our meals. We were now all together -- all ten of us: me, Betty, Susan, Christy, Matthew, Gail, Derrold, Debbie, Eddie and John. Let the fun begin!!

When I first heard of the city of Mbeya, I was pronoucing it as muh-bay-ya. But, the "m" is actually pronounced with the lips closed, like you're saying, "Mmmm... that tastes good!" So, it sounds like mmm-bay-ya. Mbeya is a city of over 200,000, so it's pretty large, though, unlike Dar es Salaam, it looks more like a town that has sprawled way beyond its borders. The buildings are low and made of cinder block with tin roofs, and most of the roads are not paved; they are dirt. However, it is a wonderful place, full of friendly Tanzanians. I am assuming that Mbeya does not see many foreigners, as the residents stare at us but do not harass us. They do, however, approach me and ask me where I am from. Most think I am Canadian, and when I tell them I'm American, they inevitably start talking about President Bush. It seems they all like our 43rd president! 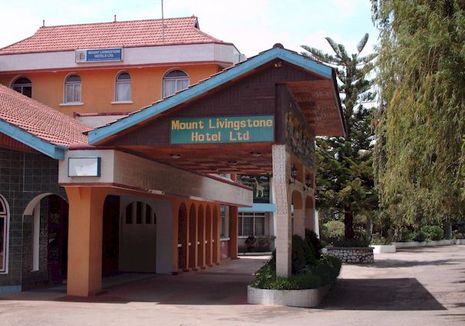 After we all check into the Mount Livingstone Hotel located on the edge of Mbeya and get settled, Betty and I head into the city center to find an Internet cafe. The road into town is dusty, but there are very few vehicles, just lots of people walking. We quickly find a small shop with computers, and we both plunk down the equivalent of US$0.50 30 minutes each. The Internet connection is extremely slow and many of the keys stick, but after half an hour, we each manage to get several emails off to our families.

Once we return to the hotel, we join the rest of our group in the lounge and discuss our upcoming expedition over wine and beer. As Eddie tells us more about where we hope to be going and what we will be doing, I am getting more excited. This will be our last night sleeping in a bed for quite awhile! It will be tents and sleeping bags from now on.

It is already dark when we head out to dinner. Being almost smack dab on the Equator, Tanzania pretty much has 12 hours of daylight and 12 hours of darkness year-round. So by 7 pm it is pitch black here. (Like most of of Tanzania, electricity is sketchy at best, and once the sun goes down Mbeya gets pretty quiet.) I think it is quite funny that we end up going to a Mexican restaurant in Africa. The outside of the joint is lit up with strings of colorful lights (a generator, perhaps?), but inside the place is empty. We order, eat and continue to get aquainted with each other. Toward the end of the meal I have to use the bathroom, but the restaurant does not have a toilet. The owner feels pretty bad, but he says he knows where a really nice bathroom is. I look at Eddie questionably, and he says it is ok, so I leave the restaurant with the proprietor, walk across the deserted and inky black street, and together we enter a four-story apartment building that is under construction. Not too sure about this!! We walk up several flights of stairs and at the end of a hallway, the proprietor unlocks one of the apartment doors. Now I'm positively not sure about this. But I've got to pee really bad so I take my chances. When I come out of the bathroom -- which, by the way, had no lights or toilet paper -- the proprietor was gone. I walked back down the hall, down the steps, out of the building, across the street, and back into the restaurant, where the owner was talking with my group. Okay, that was a little scary, but I survived! 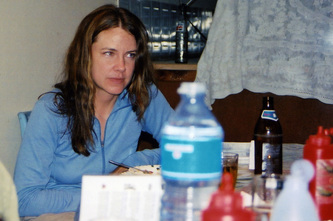 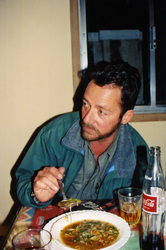 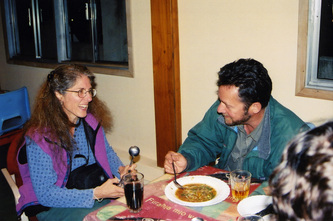 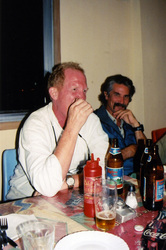 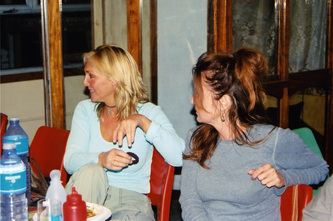