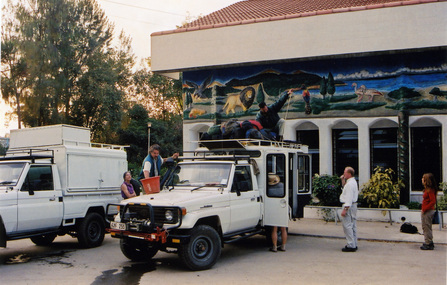 Washing the Land Rover and packing our gear at the Mount Livingstone Hotel.
Up early this morning because I am so excited to get started on the expedition. Actually, I was awakened by some clanging sounds coming outside my and Betty's hotel window. Betty looked out of the window and saw a man filling a large container with wood. Apparently this is how the water in our bathroom is heated. The furnace outside our room is stoked with wood and then lit with a match, which eventually heats the water that we will use to shower. For such a modern looking hotel, this is sure an archiac way to get hot water!

After breakfast, everyone brought their Tusker duffle bag out to our vehicles, which Derrold and John were washing. We each hoisted our duffles and sleeping bags to Eddie, who was busy tying them down on the top of the Land Rover. Everything else was already loaded either on the LR or in the chuck wagon -- food, cooking utensils, tents, camp chairs, 8 blue plastic jerry cans filled with water, and the ever-so-important cooler filled with soda, beer and liquor. 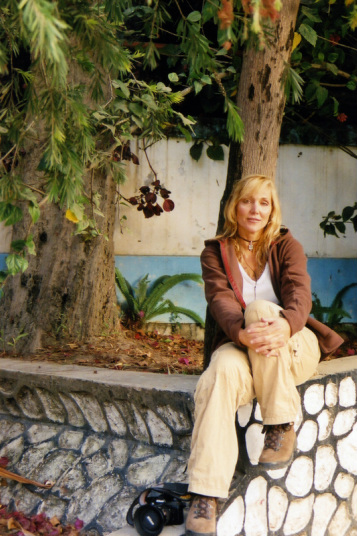 Susan relaxing before we all load into the Land Rover to start our expedition.
As we were getting ready to leave our hotel to start our journey to Katavi National Park, we had a short pow-wow outside the Land Rover with  Eddie.  He wanted us to know that all any of us had to do was indicate to him that we  wanted to stop for any reason – bathroom break, photo op, sick call, etc. – and he would stop. Well, that made me feel a lot better because I have a bladder the size of a walnut.

After about 90 minutes down the road, my bladder was starting to feel a little full. However, I did not want to be the first one to request a stop, so I tried to distract myself by taking in the surrounding landscape. By now we were in the forest and away from any sign of human life. As my bladder got fuller and fuller, I thought to myself that I was going to have to say something. At just that moment, though, Debbie announced that she needed  a pee break.

Eddie pulled over to the side of the dirt road.  We all (thank you, Debbie) piled out of our vehicle and headed off in different directions into the trees.
Despite it being winter, the underbrush was thick, and I didn’t have to venture too far before I found a suitable tree to squat behind and do my
business. I finished, stuffed my now somewhat soggy toilet paper into my pants pocket for future use (it’s amazing how many times one can use the same piece of TP before it completely disintegrates), zipped up my pants, and exited the woods. As I approached the Land Rover I happened to
look down and noticed that a large, white seed pod about the size and shape of a mango was stuck to the thigh portion of my pants. I started to brush it off, when all of a sudden it started moving in a hundred different directions!

It was then that I realized the “seed pod” was actually a nest of baby spiders. It looked like thousands of sesame seed-sized, light gray spiders. They
were crawling over me in all directions. I continued to attempt to brush off the nest, but my actions just further dispersed the babies to more portions of my body.

Gail grabbed a can of permethrin, a topical insecticide used as a mosquito repellant, and turned it on me like a fire extinguisher. Baby spiders
started dropping like flies from my body as I gagged on the chemical cloud that now enveloped my entire body. I wasn’t sure what was worse: being covered by thousands of teeny, tiny arachnids or death by insecticide vapor.  Finally, after a cursory inspection determined that I was no longer inhabited by spiders, the permethrin was put away, I climbed back into the Land Rover, and we continued on our way.

Nonetheless, we did end up with some additional travelers as I continued that day to find tiny, sesame seed-sized, light gray spiders appearing now and then crawling on my leg, arm, neck, hand…

We are on our way to Katavi National Park via Sumbawanga, a large town near the border of Zambia. I'm not sure what the regular route is, but I know it takes about 12 hours. We were driving off the beaten path -- way off -- and made it in half that time. The roads -- if you could call them that -- were terrible: all dirt, rutted and pot-holed. But the landscape was stunning, and we drove through many tiny villages where the locals looked at us with bewildered expressions -- I don't know if it was because they see so few vehicles on the roads or if it was because we had white skin. The children, however, came running up to the road smiling and waving at us as we drove by them in a cloud of dust. I didn't mind this drive at all; that's what is going to make this expedition a blast!!

By the time we got to Sumbawanga, the sky was gray and the air was a little cool. We stopped at a petrol station. There must have been a hundred trucks stopped as well since this is the last big town before entering Zambia. This town was a dismal place. After we filled up with gas, we drove onto the Christian mission where we were going to be camping tonight, but when we got there we found out that there was no room for us. I was kind of glad because the weather didn't look too great. Instead we ended up at the Forestway Country Club, a very small nice hotel owned by an Indian. By the way, the Forestway Country Club was definitely NOT a country club!!