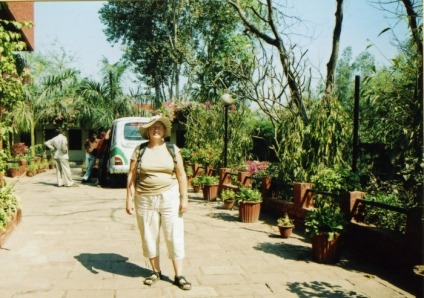 Hotel Sheela
We traveled by train to Agra this morning.  The train left Delhi at 7:10 and got into Agra at 9:50.  We had breakfast on the train – coffee, bread and butter, and some hot Indian potato patties with green and red peppers.

On the way out of Delhi, we passed unbelievable poverty all along the railroad tracks. Shanty towns, women carrying water on their heads, men and boys squatting to do their business in full view of the train passengers. Once we got away from Delhi, the countryside was beautiful; people working in the rice fields, herders tending their livestock, women making patties from cow dung (which sounds gross, but the way the women stack the patties is quite pretty).

Agra, most famous for the Taj Mahal, is located on the Yamuna River. At the Agra rail station, we were met by small electric open-sided van-type vehicles.  (Only non-polluting electric vehicles are allowed in Agra.) The one Susan, Ben, Emma and James were in got a flat tire halfway to our hotel, so my vehicle had to go “rescue” them.

On the way to our hotel, we drove through extremely narrow streets lined with small shops and crowded with people and dogs. (Not too many cows wandering around here!) Suddenly, we came upon a huge procession of people in the street.  As we carefully maneuvered past them, we discovered it was a funeral.  The body was wrapped in colorful cloth and carried on a platform hoisted on top of the shoulders of 6 men.  A band was accompanying the mourners and playing music, but the funeral procession, which consisted solely of men, looked very somber.

We finally arrived at the Sheela Hotel, where we’ll be staying for the next couple days. It was in a beautiful garden setting, but my room was the worst I’ve had so far.  The hardest bed and a pillow like a rock – literally!
After we dumped our luggage, we climbed back into the vehicles for the drive to the Red Fort and the Jama Masjid, one of the largest mosques in India.

Afterwards, we visited a carpet factory, where we saw how Indian "oriental" rugs are made; it was extremely interesting.  It takes 9 months to make one 8’ x 10’ rug.  This particular carpet factory trains local village folk how to weave the actual rugs, but the factory designs them, spins and dyes the yarn (either wool or silk), fixes mistakes made by the weavers, and stretches the rugs.  We had an opportunity to purchase a rug, and I did just that.  I bought a beautiful 6 ’x 8’ rug of red, green and cream wool for under $400.  It will be delivered to Delhi the day I arrive before returning home to the U.S. 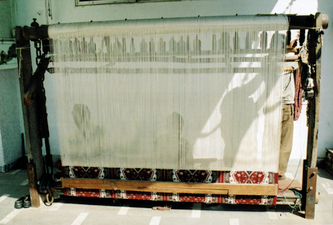 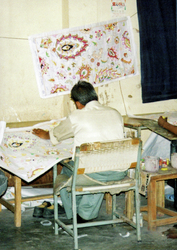 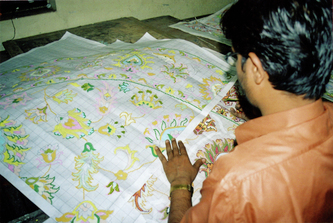 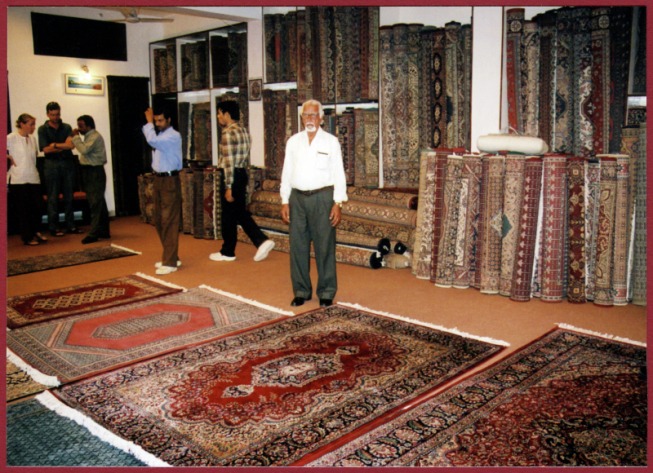 At 3:30 p.m., we walked to the east entrance of the Taj Mahal.  My hotel was literally only a few hundred feet from the entrance.  My first view of the Taj Mahal was BREATHTAKING!  The Taj was stunning to behold. 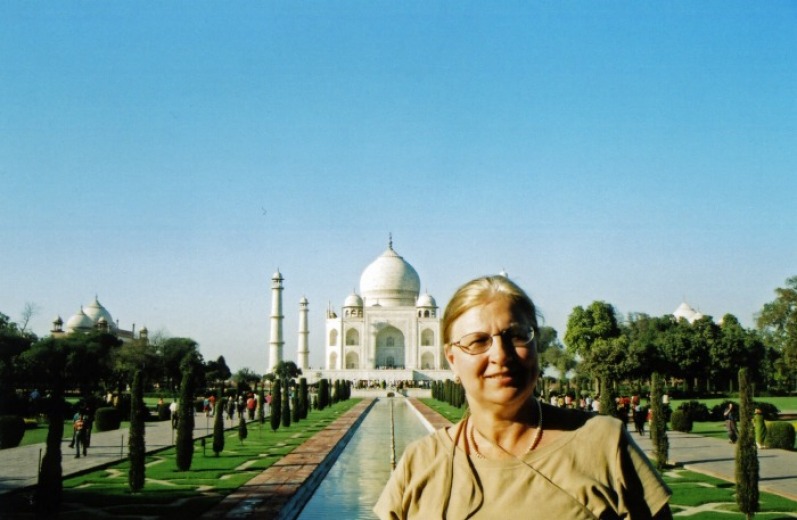 Me in front of the Taj Mahal. 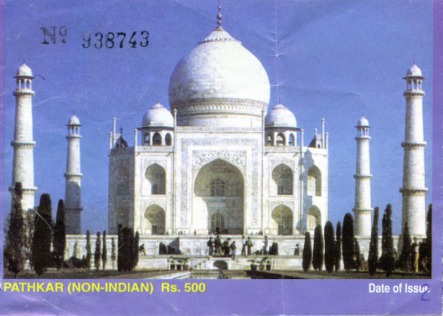 Sheer poetry in marble. Majesty and magnificence, unrivalled. Love redefined. The Taj Mahal, the one and only one of its kind across the world. The monumental labor of love of a great ruler for his beloved queen. The ultimate realization of Emperor Shah Jahan's dream. One of the New Seven Wonders of the World.

The white domed marble mausoleum is its most familiar component, but the Taj Mahal is actually an integrated complex of structures. In December 1631, the fifth Mughal Emperor, Shah Jahan, commenced the construction of the Taj Mahal, one of the greatest monuments of all time. It was built in memory of his beloved and favorite wife, Mumtaz Mahal, fulfilling one of the promises that he made to her as she lay on her deathbed after giving birth to their 14th child: To erect a monument to match her beauty.  It took 21 years to complete.

The origin of the name "Taj Mahal" is not clear. Court histories from Shah Jahan's reign only call it the rauza (tomb) of Mumtaz Mahal. It is generally believed that "Taj Mahal" (usually translated as either "Crown Palace" or "Crown of the Palace") is an abbreviated version of her name, Mumtaz Mahal.

Mumtaz Mahal’s tomb was in the mausoleum.  To enter the mausoleum, I had to don booties over my shoes. The inside was very dark, but its beauty was quite visible. (Unfortunately, no photography was allowed inside the tomb.) There were Muslim verses from the Qur’an inlayed in marble throughout the inside of the tomb, as well as on the outside. 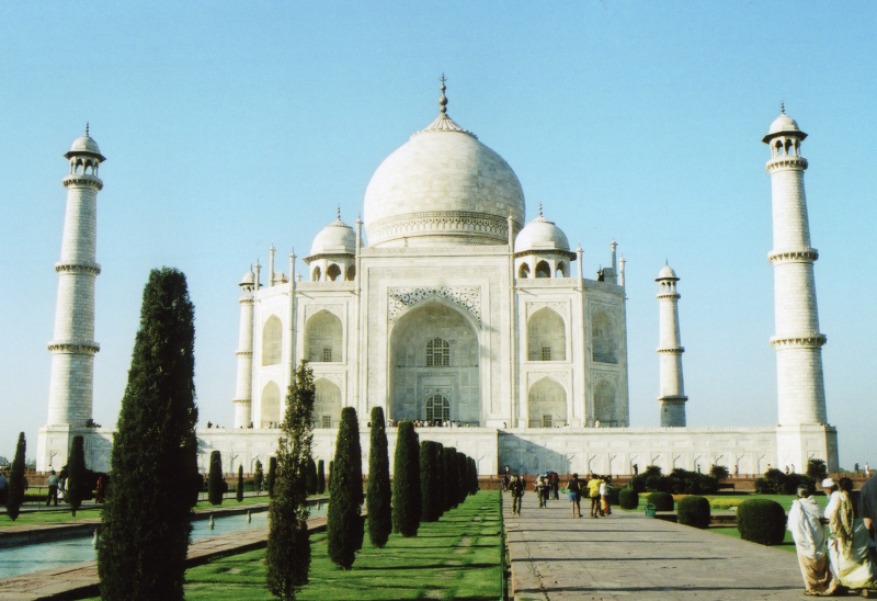 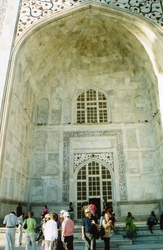 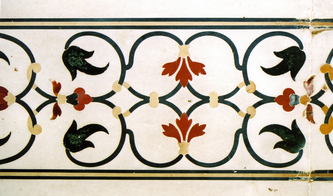 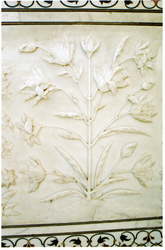 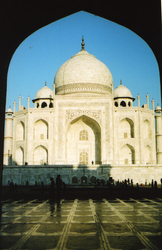 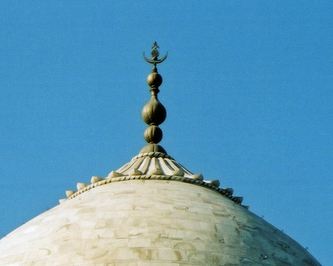 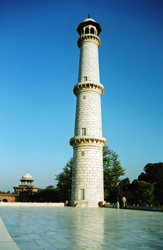 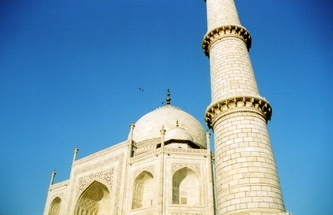 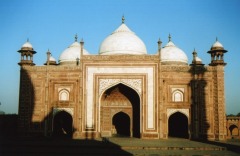 On either side of the mausoleum were two red sandstone structures, exact mirror images of each other.  The western structure was a mosque and faced toward Mecca. The eastern building was the jawab, or answer, whose primary purpose was architectural balance. While exploring these buildings, an Indian man “volunteered” to show me exactly where to stand to get the best photos of the Taj, as well as inside the mosque.  Afterwards, of course, he demanded payment for his services.  He got majorly offended when I offered him 100 rupees, so I ended up giving him 150, which he still grumbled at. 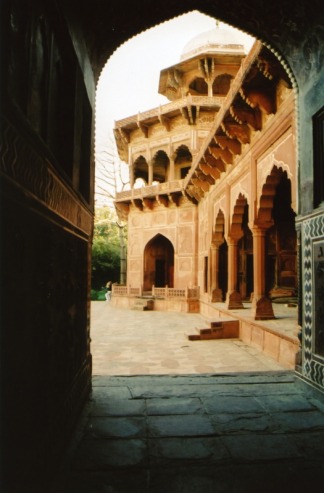 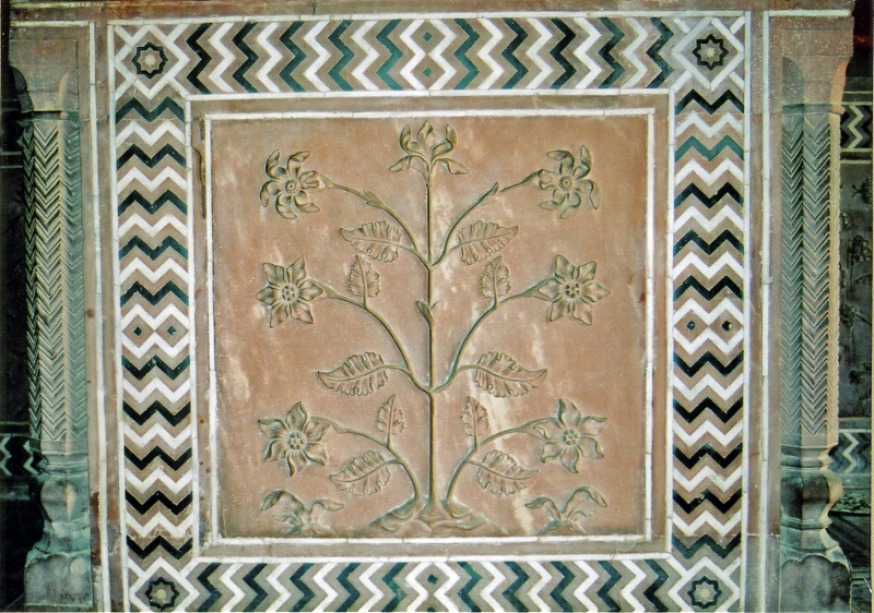 Floral sprays are carved in relief and framed with pietra dura and stone inlay borders. The profusion of floral motifs in the Taj Mahal symbolizes the central paradise theme.
At sunset, I perched myself on the back side of the mosque to watch the sun go down and take some photos. 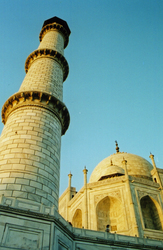 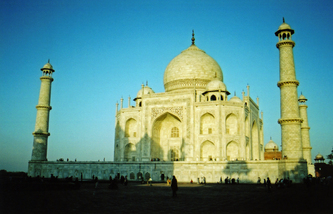 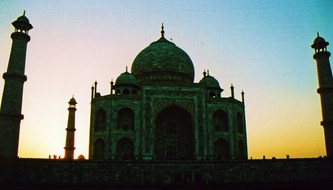 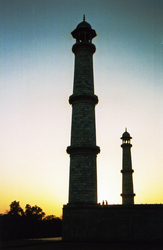 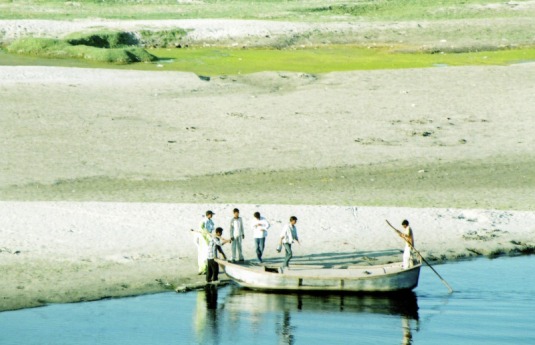 Yamuna River behind the Taj Mahal.
After a great day at the Taj Mahal, I had an equally great dinner, but again couldn’t eat much.  I stayed away from the lime sodas, so I slept pretty good.

NEXT: Agra and Fatehpur Sikri